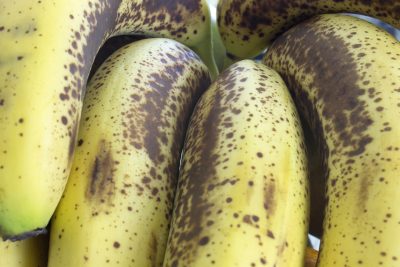 Native to tropical Asia, the banana plant (Musa paradisiaca) is the largest herbaceous perennial plant in the world and is grown for its popular fruit. These tropical members of the family Musaceae are prone to a number of diseases, many of which result in black spots on banana fruit. What causes black spot disease in bananas and are there any methods for treating black spots on banana fruit? Read on to learn more.

Normal Black Spots on a Banana

Black spot disease in bananas is not to be confused with black spots on the fruit of a banana tree. Blackish/brown spots are common on the exterior of the banana fruit. These spots are commonly referred to as bruises. These bruises mean that the fruit is ripe and that the acid within has been converted to sugar.

In other words, the banana is at the peak of its sweetness. It’s just a preference for most people. Some people like their bananas with a little tang when the fruit is just turning from green to yellow and others prefer the sweetness that arises from black spots on banana fruit peels.

Anthracnose causes brown spots on the fruit’s peel, presenting as large brownish/black areas and black lesions on green fruit. As a fungus (Colletotrichum musae), Anthracnose is promoted by wet conditions and is spread via rainfall. For commercial plantations afflicted with this fungal disease, wash and dip fruit in fungicide prior to shipping.

Panama disease is another fungal disease caused by Fusarium oxysporum, a fungal pathogen that enters the banana tree through the xylem. It then spreads throughout the vascular system affecting the entire plant. The spreading spores cling to vessel walls, blocking water flow, which in turn causes the plant’s leaves to wilt and die. This disease is serious and can kill an entire plant. Its fungal pathogens can survive in soil for close to 20 years and are extremely difficult to control.

Panama disease is so serious that it almost wiped out the commercial banana industry. At the time, 50 plus years ago, the most common banana cultivated was called Gros Michel, but Fusarium wilt, or Panama disease, changed all that. The disease began in Central America and rapidly spread to most of the world’s commercial plantations which had to be burned down. Today, a different variety, the Cavendish, is again threatened with destruction due to the resurgence of a similar fusarium called Tropical Race 4.

Treating black spot of banana can be difficult. Often, once a banana plant has a disease, it can be very difficult to halt its progression. Keeping the plant pruned so it has excellent air circulation, being vigilant about pests, such as aphids, and the routine application of fungicides should all be instituted to combat diseases of banana causing black spots.