How To Divide A Banana Tree: Information On Banana Plant Splitting 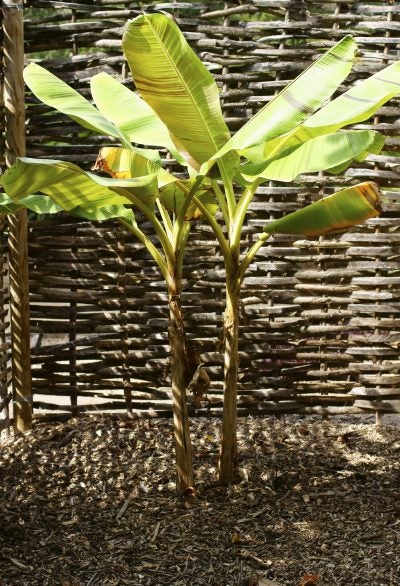 Like most fruit trees, a banana plant sends out suckers. With grafted fruit trees, it is recommended that you prune and discard the suckers, but banana plant suckers (called “pups”) can be split from the parent plant and grown as new plants. Continue reading to learn how to divide a banana tree.

In time, whether your banana plant is container grown or grown in ground, it will send out banana plant pups. Container grown banana plants may sprout suckers as a sign of stress — from being pot bound, under watered or unhappy for some other reason. Sending out suckers is their way of trying to survive conditions that they are struggling in. The new pups will grow new roots that can suck up more water and nutrients for the parent plant. New pups can also begin to grow to replace a dying parent plant.

Oftentimes though, a perfectly healthy banana plant will produce pups just because reproducing is a part of nature. When your banana plant sends out suckers, it is a good idea to examine the parent plant for signs of stress, disease or insects. You should also examine the roots of container grown banana plants to see if they are pot bound.

How to Divide a Banana Tree

Dividing banana plants should be done only when the pup being divided has grown to at least a foot (30.48 cm.) tall. By that point, the pup should have developed its own roots so that it is not depending solely on the parent plant for survival. Pups that are removed from the parent plant before they develop their own roots are not likely to survive.

To separate banana plants, gently remove the soil around the plant’s roots and sucker. When the soil is removed, you can make sure that the pup you are dividing is growing its own roots. If not, put the soil back and give it more time. If the pup has nice roots of its own growing separate from the parent plant, you can divide it and plant it as a new banana plant.