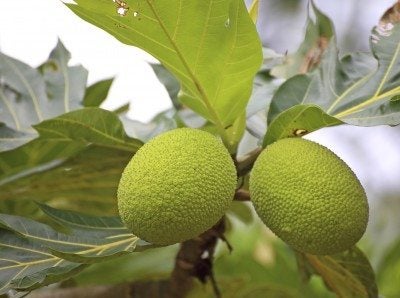 Although we don’t grow them here, too chilly, breadfruit tree care and cultivation is widely practiced in many tropical cultures. It is a major carbohydrate source, a staple throughout much of the tropics, but what is breadfruit and where does breadfruit grow?

What is a Breadfruit?

Breadfruit (Artocarpus altilis) is native to the Malayan Archipelago and gained some recognition due to its affiliation with Captain Bligh’s famed ship, the Bounty, in 1788. Aboard the Bounty were thousands of breadfruit trees bound for the islands of the West Indies. The fruit is grown in South Florida in the United States or imported from the West Indies, particularly Jamaica, from June through October, sometimes year-round, and is found in local specialty markets.

The breadfruit tree attains a height of about 85 feet (26 m.) and has large, thick, deeply notched leaves. The entire tree yields a milky juice called latex when cut, which is useful for a number of things, most notably, boat caulking. The trees have both male and female flowers growing on the same tree (monoecious). Male blooms emerge first, followed by female blooms that are pollinated a few days later.

The resulting fruit is round to oval, 6 to 8 inches (15-20.5 cm.) long and about 8 inches (20.5 cm.) across. The skin is thin and green, gradually ripening into more of a pale green with some reddish-brown areas and mottled with irregular polygon-shaped bumps. At maturity, the fruit is white inside and starchy; when green or under-ripe, the fruit is hard and starchy like a potato.

Breadfruit is mostly utilized as a vegetable and, when cooked, has a musky, fruity flavor and, yet, extremely mild, lending itself well to bold dishes such as curries. Ripe breadfruit may have a texture like a ripe avocado or be as runny as ripe brie cheese.

Breadfruit is one of the highest-producing food plants in the world. A single tree can produce up to 200 or even more grapefruit-sized fruits per season. Productivity varies according to wet or drier cultivation areas. The fruit is rich in potassium and is used very much akin to a potato – it can be boiled, steamed, baked, or fried. Soak breadfruit for about 30 minutes prior to use to remove the white, starchy sap or latex.

Another interesting breadfruit tree fact is that it is closely related to the “breadnut” as well as to the “jackfruit.” This equatorial lowland species can most often be found below elevations of 2,130 feet (650 m.) but may be seen at heights up to 5,090 feet (1550 m.). It will thrive in either neutral to alkaline soil composed of sand, sandy loam, loam, or sandy clay. It even tolerates saline soils.

The Polynesian peoples transported root cuttings and air layered plants over great ocean distances, so entranced were they with the plant. Not only was breadfruit an important food source, but they used lightweight, termite-resistant wood for buildings and canoes. The sticky latex produced by the tree was utilized not only as a caulking agent but also to trap birds. The wood pulp was made into paper and used medicinally as well.

The traditional staple of the Hawaiian people, poi, which is made of taro root, can also be substituted with breadfruit or augmented with it. The resultant breadfruit poi is referred to as poi ulu.

Recently, scientists have discovered three compounds or saturated fatty acids (capric, undecanoic, and lauric acid) that are more effective at repelling mosquitoes than DEET. The historical and cultural importance of breadfruit non-withstanding, we continue to find new uses for this amazingly versatile plant.

Printer Friendly Version
Read more about Breadfruit
Next>
Did you find this helpful? Share it with your friends!
FacebookTweetPinEmail
Related Articles
Newest Articles
You might also like…
Additional Help & Information