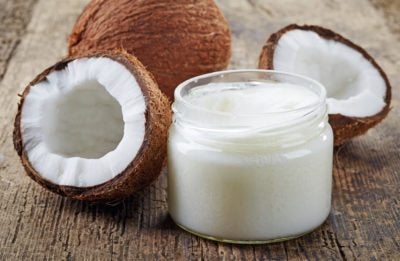 You can find coconut oil listed as an ingredient in many foods, cosmetics, and other items. What is coconut oil and how is it processed? There is virgin, hydrogenated, and refined coconut oil, each being made a slightly different way. There are also different coconut oil uses for each type. There are many benefits of coconut oil, but it is best to know which type you need in order to harness the most profit.

What is Coconut Oil?

Fitness magazines, health publications, and internet blogs all tout the advantages of coconut oil. It appears to have several health benefits but is also useful in the garden. However, coconut has the most saturated fat known and is so high in lipids it is actually solid at room temperature. The bottom line is that coconut oil facts are rather muddy and the real research really isn’t finished on this much vaunted alternative fat.

Coconut oil is made using either heat, compression, or chemical extraction methods. Virgin coconut oil is just pressed and has no additional refining. Refined coconut oil is also pressed but is then bleached and steam heated as well. Much of the flavor and scent is removed when the oil is refined. Refined cooking oil can also heat to higher temperatures than other oils without becoming damaged, but is for single use only, as carcinogens can build up in the oil. Hydrogenated coconut oil is shelf stable and is seen outside the United States in many processed foods but rarely found inside the States.

Check the labels on most processed foods, especially sweets, and you will find coconut oil. It is commonly used to add texture and flavor to a variety of foods. The oil is 92 percent saturated. By comparison, beef lard is 50 percent. There is no doubt that some fat is necessary in our diets but which fat should you choose?

There may be a correlation between eating the right fats and weight loss or heart health, but it hasn’t been confirmed that coconut oil is part of the solution or part of the problem. It is known that 1 tablespoon (15 ml.) contains about 13 grams of saturated fat, which is the recommended intake from the American Heart Association. That means any coconut oil uses in your recipes should be minimal.

It is not only humanity that can reap the benefits of coconut oil. Using coconut oil for plants makes an excellent dusting and shining agent, produces an effective herbicide, and can be added to spray fertilizers to act as a surfactant.

You can even use coconut oil in your garden shed on a sharpening stone for those pruners, shovels, and other tools. You can use coconut oil on tools to keep them in correct working condition. Put a little bit on a fine steel wool and rub away rust on metal implements.

Even if you can’t eat very much and still adhere to the guidelines for a heart healthy diet, your jar of coconut oil won’t go to waste.

Printer Friendly Version
Read more about Coconut Trees
<Previous
Did you find this helpful? Share it with your friends!
FacebookTweetPinEmail
Related Articles
Newest Articles
You might also like…
Additional Help & Information