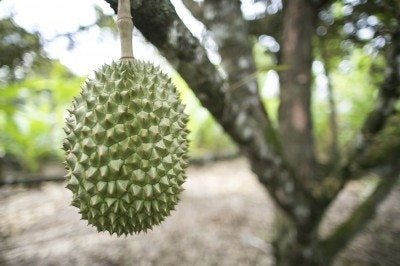 There has never been a fruit so steeped in dichotomy. Weighing up to 7 pounds (3 kg.), encased in a thick thorny shell, and cursed with an atrocious odor, the fruit of the durian tree is also venerated as the “king of fruits.” Unarguably the most popular fruit throughout Southeast Asia, durian is also banned in many public places. So what is durian fruit and what are some of the durian fruits uses? Read on to learn more.

What is Durian Fruit?

Durian fruit (Durio zibethinus) is a member of the family Bombacacea, along with hibiscus and okra. Unlike the other members of Bombacaceae, which typically have showy blooms and woody pods filled with tiny seeds and cottony fibers, durian stands alone.

Durian has large seeds surrounded by fleshy arils. The spiked husk may be green to brown, round to oblong, and filled with creamy to saffron-hued bulbs.

Durian fruit trees mature from June until August along with other tropical fruits such as the mangosteen, jackfruit, and mango.

Durian has, to most people, an offensive odor due to its composition of esters, sulfur, and ketones, which also compose “morning breath.” The smell has been described in much more colorful terms from that of roadkill, sewage, rotting onions, and vomit or combinations thereof.

The smell is so appalling that many public places have banned the fruit, including the Singapore Rapid Mass Transit. Apparently, the odiferous aroma can be detected from yards away and, in fact, many animals, particularly orangutans, are lured by its odor from over a half-mile (1 km.) away! The smell remains on the hands after eating for a lengthy period of time too.

The fruit is generally known as durian, even in native dialects; however, the notorious odor has produced less obsequious terminology such as “civet cat tree” and “civet fruit” in India and “stinkvrucht” in Dutch, which I think needs no translation. Despite its less than flattering description, it is one of the most important fruits of Southeastern Asia.

Native to Brunei, Indonesia, and the Malaysian rainforests, there are 30 known species of durian fruit trees growing throughout Southeastern Asia. The trees can reach up to between 90-130 feet (27.5 to 39.5 m.) in height with erect trunks, 4 feet (1 m.) across, and an irregular dense or open crown with evergreen leaves. Flowers are bell-shaped, born in clusters off the older, thick branches.

While the odor has been vilified, the flavor of the flesh has been lauded as being like a “rich custard highly flavored with almonds” and with “a strong aromatic taste, followed by a deliciously sweet flavor, then a strange resinous or balsam-like taste of exquisite but persistent savor.”

Another description about durian fruits praises the flavor as “like a concoction of ice cream, onions, spices, and bananas all mixed together.” Millions of Southeast Asians can’t be wrong, so there must be something intoxicating about this fruit and the popularity of durian fruit-growing plantations.

Durian is sold whole or cut and divided into segments wrapped in plastic. It is usually eaten by hand after it is chilled. The fruit can be eaten at different ripeness stages and is used to flavor many sweets, such as ice creams and other dishes. The ripe flesh can be eaten with a spoon and has a consistency much like custard.

Durian may be boiled with sugar or coconut water. The Javanese make durian into a sauce and serve it with rice or combine the pulp with onion, salt, and vinegar and use it as a relish. Some regions smoke durian or ferment it in earthenware pots.

Durian can also be found canned in syrup or dried. Blocks of durian paste can be found at many a Southeastern market. In some regions of Thailand, durian is combined with pumpkin. Unripe durian is boiled and eaten as a vegetable.

Seeds are small, round to oval, and look and taste like jackfruit seeds. These seeds are edible and can be boiled, dried, fried, or roasted. The seeds are sliced thinly and cooked with sugar or dried and fried with coconut oil and spices in Java. Other regions simply discard the seeds.

The young leaves and shoots of the durian fruit tree are sometimes cooked as greens. Also, sometimes the rind of the fruit is burned and the resulting ashes added to special cakes.

Certainly a useful and interesting fruit, but I’m not sure the description of smelling like “dirty gym socks” has me intrigued enough to seek a durian out for a taste!