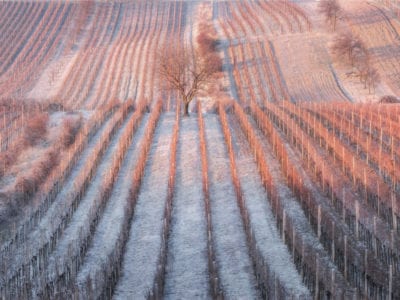 Whether you’re a home grower or a commercial producer, grapevine frost damage in the spring can severely reduce your yields later in the season. Although grapes are winter hardy plants in many locations, grapevines in the spring are particularly susceptible to frost and freezing temperatures once the buds begin to swell. This is due to an increase in sap flowing in the tissues of the buds and the formation of ice crystals when those fluids freeze.

There are cultural practices growers can take to reduce grapevine frost damage in the spring:

Choice of cultivar – Bud break in different varieties of grapes can vary as much as two weeks, with cold hardy varieties coming into the growth season the earliest. Matching those early-breaking varieties with the warmest microclimates allows growers to better protect these cultivars from grapevine frost damage in the spring.

Prune twice – Early pruning can encourage buds to swell and break. A better method is to hold off winter pruning as long as possible and prune twice, leaving 5 to 8 buds the first time. Once the danger of frost to the grapevines in the spring has passed, prune to the desired number of buds. Retain only those buds which have not been frost damaged.

Whenever there’s a threat of freezing temperatures in the spring, there are steps growers can take to prevent grapevine frost damage:

Sprinklers – Water releases a small amount of heat as it freezes which can be significant in reducing the formation of ice crystals inside the buds. The science behind this method requires growers to thoroughly understand how variations in dew point and wind speed affect temperature. Improperly used, sprinklers can generate more grapevine frost damage than if no measures were taken.

Heaters – For large scale operations, fuel costs and environmental issues make this method of protecting grapevines in the spring impractical. Home growers may find heaters doable for the occasional frost or freeze threat to a small arbor.

Wind machines – These large fans pull down warm air from the inversion layer and work well for radiation frosts. This type of frost occurs on clear, calm nights when daytime temperatures were above freezing. Wind machines are advantageous for growers with seven or more acres.
Covers – Smaller operations and home growers can also prevent spring frost damage to grapes by covering the arbors with blankets or sheets. These must be secured at ground level to prevent cold air from creeping underneath the tent.