Olive Oil Information: Learn How To Use Olive Oil 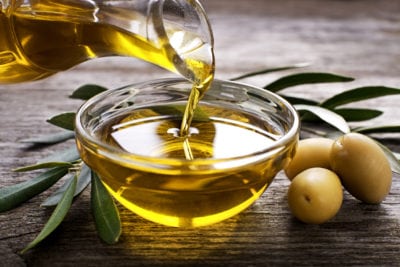 Olive oil had been made much of and with good reason. This nutrient rich oil has been used for thousands of years and features prominently in much of the cuisine we eat. Of course, we know how to use olive oil with foods, but have you ever wondered about olive oil’s other uses? There are, indeed, other uses for olive oil. The following article contains information about what exactly olive oil is and how to use olive oil beyond cooking.

What is Olive Oil?

Olive oil is a liquid fat pressed from the fruit of olive trees, which are native to the Mediterranean. After the olives are picked and washed, they are crushed. Long ago, the olives were painstakingly crushed between two stones, but today, they are crushed automatically between steel blades.

Once crushed, the resulting paste is macerated or stirred to release the precious oil. They are then spun in a centrifuge to separate the oil and water.

Olive trees have been cultivated throughout the Mediterranean since the 8th millennium B.C. Although many of us think of olive oil as an Italian product, in actuality, most of the olives are produced in Spain, followed by Italy and Greece. “Italian” olive oil is often produced elsewhere and then processed and packaged in Italy, which has no bearing on the quality of the oil.

The flavor of the end product is not only representative of the olive cultivar but of the altitude, time of harvest, and type of extraction process. Olive oil consists mostly of oleic acid (up to 83%) along with lesser amounts of other fatty acids like linoleic and palmitic acid.

Extra virgin olive oil has its own stringent set of rules and must have no more than .8% free acidity. This specification makes for oil with the most favorable flavor profile and is often represented in the higher cost.

Olive oil is one of the three central foods to the people of the Mediterranean, the others are wheat and grapes.

How to Use Olive Oil

Olive oil is most often used for cooking and blending into salad dressings, but these aren’t the only uses for olive oil. Olive oil plays a significant part in religious rituals. Catholic priests use olive oil prior to baptism and to bless the sick, as do the Christ of Latter Day Saints.

Early Orthodox Christians used olive oil to light their churches and cemeteries. In Judaism, olive oil was the only oil permitted for use in the seven branched Menorah, and it was the sacramental oil used to anoint the kings of the Kingdom of Israel.

Other olive oil uses involve beauty routines. It has been used as a moisturizer for dry skin or hair. It is sometimes used in cosmetics, conditioners, soaps, and shampoos.

It has been used as a cleanser and antibacterial agent as well and, even today, may be found in pharmaceuticals. The ancient Greeks used olive oil to massage aching sports injuries. Modern Japanese believe that both ingesting and topical application of olive oil are good for the skin and overall health.

Printer Friendly Version
Read more about Olive Trees
<PreviousNext>
Did you find this helpful? Share it with your friends!
FacebookTweetPinEmail
Related Articles
Newest Articles
You might also like…
Additional Help & Information