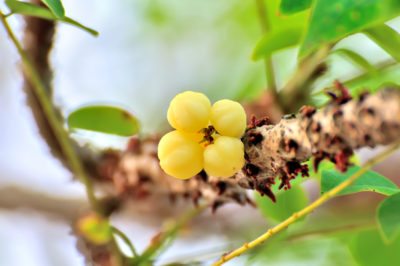 Otaheite gooseberry trees are a familiar sight in villages and farms in Guam, throughout South Vietnam and Laos, and into northern Malaya and India. This specimen was introduced into Jamaica in 1793 and has spread throughout the Caribbean, to the Bahamas and Bermuda. Naturalized in southern Mexico and parts of Central America, it can also more rarely be found in Colombia, Venezuela, Surinam, Peru, and Brazil.

This unusual ornamental shrub or tree grows to 6 ½ to 30 ft (2-9 m.) in height. It is a member of the family Euphorbiaceae, one of few that bear edible fruit.

The habit of the otaheite gooseberry is spreading and dense with a bushy crown of thick, rough, main branches. At the tips of each branch are clusters of deciduous green or pink smaller branchlets. Leaves are thin, pointed and ¾ to 3 in (2-7.5 cm.) long. They are green and smooth on top and blue-green on the underside.

Fruiting is preceded by small male, female or hermaphroditic pink flowers clustered together. The fruit has 6-8 ribs, is 3/8 to 1 in (1-2.5cm) wide, and pale yellow when immature. When ripe, the fruit becomes almost white and waxy in texture with crisp, juicy, tangy flesh. At the center of the cermai fruit is a tightly ensconced ribbed stone containing 4-6 seeds.

If you’re interested in growing otaheite gooseberry trees, you’ll need to have a greenhouse or live in a tropical to subtropical region. That said, the plant is hardy enough to survive and fruit in Tampa, Florida where temperatures can be much colder than in southern Florida.

Otaheite gooseberry thrives in almost any soil but prefers moist soil. Trees are usually propagated via seed but can also be propagated by budding, green wood cuttings, or air layers.

This gooseberry must mature about 4 years before producing fruit of any substance. Once of bearing age, trees can bear 2 crops per year.

Otaheite gooseberry has many uses. It is often used in cooking wherein the fruit is sliced from the pit and then blended with sugar which draws out the juice and sweetens the fruit so it can be made into sauce. In some countries, the tart flesh is added as a special flavoring to dishes. The fruit is juiced, preserved, candied, and even pickled. In India and Indonesia, the young leaves are cooked as greens.

In India, the bark is used occasionally for tanning hides.

There are many medicinal otaheite gooseberry uses. It is prescribed for everything from a purgative, to a treatment of rheumatism and psoriasis, to relief for headaches, coughs, and asthma.

Lastly, otaheite gooseberries have a more macabre use. A juice extracted from the bark of the tree contains toxic ingredients such as saponin, gallic acid, along with tannin, and possibly lupeol. Apparently, this toxicity has been exploited and used in criminal poisoning.