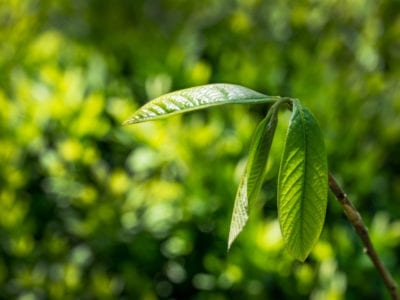 The pawpaw is a tasty and unusual fruit. However, the fruits are rarely sold in stores, so if there are no wild trees in your area, the only way to get the fruit is usually to grow it yourself. Propagating pawpaw cuttings is often thought of one way to accomplish this. Can you root pawpaws this way?

Pawpaw (Asimina triloba) is a member of the Annonaceae plant family along with the tropical sweetsop, soursop, sugar apple, and cherimoya plants. However, the pawpaw is native to the eastern half of North America. Pawpaws mostly grow in the wild, but they are cultivated on a small scale as well.

Pawpaw seeds are quite difficult to germinate because of complex dormancy and moisture requirements. Also, a seedling may not have the same characteristics as its parents in terms of fruit quality and climate adaptation. Therefore, some gardeners have become interested in developing a way to propagate pawpaw from cuttings.

Can You Root Pawpaws from Cuttings?

The answer is… probably not. At least not from normal cuttings. It seems that stem cuttings are only viable if they come from seedlings under eight months old, so you can only grow a full plant from a very young pawpaw cutting. Propagation of pawpaw using stem cuttings from adult plants is difficult or impossible. Specific techniques are required to grow full-sized plants from seedling stem cuttings.

Though it presents its difficulties, germinating the seeds is the most reliable way of propagating pawpaw. Cuttings from roots are a potential alternative.

How to Grow Pawpaw Trees from Cuttings Taken from Seedlings

Stem cuttings need to be taken from young seedlings if you have a goal of propagating pawpaw. Cuttings from seedlings two months old and younger have the highest viability. In experiments at Kansas State University, only 10% of cuttings from seven month old plants were able to root. So, this is only really a way of expanding one germinated seedling into a small population, which could be useful for establishing a large pawpaw planting.

If you make an attempt at rooting pawpaw cuttings, be sure to keep them continually moist. Treat with a horticultural rooting hormone that contains indole-3-butyric acid (IBA). Other than that, use the usual techniques for softwood cuttings.