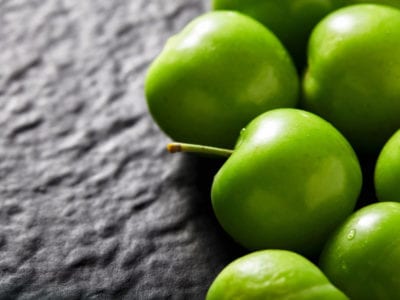 What is a Green Gage Plum?

Compact Green Gage plum trees produce fruit that is sublimely sweet. They are a naturally occurring hybrid of the European plum, Prunus domestica and P. insititia, a species that includes Damsons and Mirabelles. During the reign of King Francis I, the trees were brought to France and named after his queen, Claude.

The trees were then imported into England in the 18th century. The tree was named for Sir William Gage of Suffolk, whose gardener had imported a tree from France but lost the label. A favorite plum since Jefferson’s presidency, Green Gages were included in his famous garden at Monticello and extensively cultivated and studied there.

The trees bear small to medium-sized, oval, yellowish-green fruit with smooth skin, a juicy taste, and freestone flesh. The tree is self-fertile, small with low branches and a rounded habit. The honey-plum flavor of the fruit lends itself well to canning, desserts, and preserves as well as eaten fresh and dried.

How to Grow a Green Gage Plum Tree

Green Gage plums can be grown in USDA zones 5-9 and thrive in regions with sunny, hot summers combined with cool nights. Growing Green Gage plums is much the same as growing other plum tree cultivars.

Plant bare-root Green Gages in early winter when the tree is dormant. Container-grown trees can be planted at any time during the year. Situate the tree in a sheltered, sunny area of the garden with well-draining, fertile soil. Dig a hole that is as deep as the root system and wide enough to allow the roots to spread out. Take care not to bury the scion and rootstock connection. Water the tree in well.

As the fruit begins to form in mid-spring, thin it by removing any damaged or diseased fruit first and then any others that will allow the remaining to grow to full size. In another month or so, check for any overcrowding and, if need be, remove additional fruit. The goal is to thin the fruit 3-4 inches (7.5-10 cm.) apart. If you fail to thin plum trees, the branches become too laden with fruit which, in turn, may damage the branches and encourage disease.

Prune the plum trees in the late spring or early summer.

Green Gage plums will be ready for harvest from late summer into early fall. They are prolific producers and may produce so extensively in a single year that they don’t have enough energy to fruit the successive year, so it’s advisable to take advantage of a bumper crop of sweet, ambrosial Green Gages.