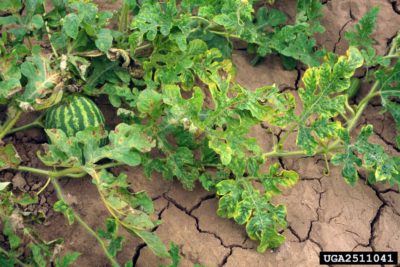 Watermelons are a fun crop to grow, especially with children who will love the tasty fruits of their labor. However, it can be discouraging for gardeners of any age when disease strikes, and our hard work does not pay off. Watermelons can be susceptible to many disease and insect problems, sometimes both. One such condition both disease and insect related is squash leaf curl on watermelons or watermelon leaf curl.

Watermelon leaf curl, also known as squash leaf curl or watermelon curly mottle, is a viral disease that is spread from plant to plant by the saliva and piercing mouthparts of the insect vectors whiteflies. Whiteflies are tiny, winged insects that feed on the sap of many vegetable and ornamental plants. As they feed, they inadvertently spread diseases.

The whiteflies thought to be responsible for spreading watermelon curl are Bemisia tabaci, which are native to desert areas of the southwestern United States and Mexico. Outbreaks of watermelons with squash leaf curl virus are mainly a problem in California, Arizona, and Texas. The disease has also been seen in Central America, Egypt, The Middle East, and southeastern Asia.

Watermelon leaf curl symptoms are crumpled, wrinkled, or curled foliage, with yellow mottling around the leaf veins. New growth may grow distorted or curl upwards. Infected plants may be stunted and produce little or no fruit. Blossoms and fruits that are produced may also grow stunted or distorted.

Younger plants are more susceptible to this disease and may quickly dieback. Older plants show some resilience and may even seem to grow out of the disease as they produce normal fruit and curling, and mottling may disappear. However, once infected, the plants stay infected. Though plants may seem to recover and produce harvestable fruit, the plants should be dug up and destroyed immediately after harvesting to prevent further spread of the disease.

How to Treat Watermelons with Squash Leaf Curl Virus

There is no known cure for watermelons with squash leaf curl virus. The disease is more prevalent in midsummer to fall crops of watermelons, as this is when whitefly populations are the highest.

Insecticides, traps, and crop covers can be employed to control whiteflies. Systemic insecticides are more effective in controlling whiteflies and the spread of watermelon leaf curl virus than insecticidal soaps and sprays. However, any insecticide can potentially harm natural predators of whiteflies, such as lacewings, minute pirate bugs, and lady beetles.

Infected watermelon plants with squash leaf curl virus should be dug up and destroyed to prevent the spread of this disease.