What Is Sorghum – Information About Sorghum Plants 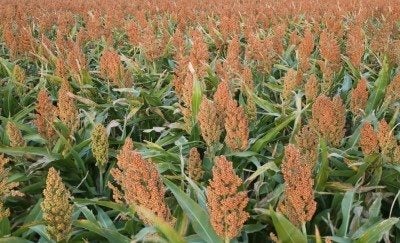 Have you ever heard of sorghum plants? At one time, sorghum was an important crop and served as a sugar substitute for many people. What is sorghum and what other interesting sorghum grass information can we dig up? Let’s find out.

If you grew up in the midwestern or southern United States, you may already be familiar with sorghum plants. Maybe you’ve woken to your grandmother’s hot biscuits slathered with oleo and drenched in sorghum syrup. Okay, more likely a great-great grandmother routinely made biscuits with syrup from sorghum plants since the popularity of sorghum as a sugar substitute peaked in the 1880’s.

Sorghum is a coarse, upright grass used for grain and forage. Grain sorghum or broom sorghum is shorter, bred for higher grain yields, and is also called “milo.” This annual grass needs little water and thrives during long, hot summers.

Sorghum grass seed has higher protein content than corn and is used as a principal feed ingredient for cattle and poultry. The grains are red and hard when ripe and ready for harvest. They are then dried and stored whole.

Sweet sorghum (Sorghum vulgare) is grown for the manufacture of syrup. Sweet sorghum is harvested for the stalks, not the grain, which is then crushed much like sugarcane to produce syrup. The juice from the crushed stalks is then cooked down to a concentrated sugar.

There is yet another type of sorghum. Broom corn is closely related to sweet sorghum. From a distance it looks like sweet corn in the field, but it has no cobs, just a large tassel at the top. This tassel is used for, you guessed it, making brooms.

Some sorghum varieties only reach about 5 feet (1.5 m.) in height, but many sweet and broom corn plants can grow to over 8 feet (2 m.).

Cultivated in Egypt over 4,000 years ago, growing sorghum grass seed ranks as the number two cereal crop in Africa where production exceeds 20 million tons per year, a third of the world total.

Sorghum can be ground, cracked, steam flaked, and/or roasted, cooked like rice, made into porridge, baked into breads, popped as corn, and malted for beer.

In the United States, sorghum is grown primarily for forage and feed grains. Varieties of grain sorghum include:

Sorghum can also be employed as a cover crop and green manure, substitutes for some industrial processes that generally use corn, and its stems are used as a fuel and weaving material.

Very little of the sorghum that is grown in the U.S. is sweet sorghum but, at one time, it was a thriving industry. Sugar was dear during the mid 1800’s, so folks turned to sorghum syrup to sweeten their foods. However, making syrup from sorghum is highly labor intensive and has fallen out of favor in lieu of other crops, such as corn syrup.

Sorghum contains iron, calcium, and potassium. Prior to the invention of daily vitamins, doctors prescribed daily doses of sorghum syrup for people suffering from maladies related to deficiencies in these nutrients.

Sorghum thrives in areas of long, warm summers with temps consistently over 90 degrees F. (32 C.). It likes sandy soil and can withstand both flooding and drought better than corn. Planting sorghum grass seed usually occurs in late May or early June when the soil is sure to have warmed sufficiently.

Soil is prepared as it is for corn with an added balanced organic fertilizer worked into the bed prior to seeding. Sorghum is self-fertile, so unlike corn, you don’t need a huge plot to aid in pollination. Sow the seeds ½ inch (1 cm.) deep and 4 inches (10 cm.) apart. Thin to 8 inches (20 cm.) apart when seedlings are 4 inches (10 cm.) high.

Thereafter, keep the area around the plants weed free. Fertilize six weeks after planting with a high nitrogen liquid fertilizer.