Tips On Harvesting Angelica: How To Prune Angelica Herbs 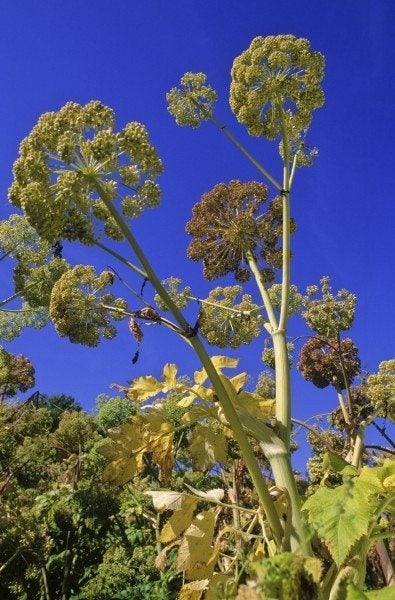 Angelica is an herb commonly utilized in Scandinavian countries. It also grows wild in Russia, Greenland, and Iceland. Less commonly seen here, angelica can be cultivated in the cooler regions of the United States where it can reach heights of up to 6 feet (2 m.)! This begs the question, does the angelic plant need trimming and, if so, how to prune angelica herbs?

Angelica (Angelica archangelica) is also known as garden angelica, Holy Ghost, wild celery, and Norwegian angelica. It is an ancient herb used for its medicinal and magical properties; it was said to ward off evil.

The essential oil contained in all parts of the plant lends itself to a multitude of uses. The seeds are pressed and the resulting oil is used for flavoring foods. The Lapps not only eat angelica but use it medicinally and even as a substitute for chewing tobacco. Norwegians crush the roots for use in breads and the Inuit use the stalks as you would celery.

As mentioned, angelica can get quite tall, so for that reason alone, some judicious pruning may be advised. While angelica plants are often grown for their sweet roots, their stems and leaves are also often harvested, which is more or less simply pruning the angelica. So, how do you prune angelica herbs?

Angelica harvesting may involve the entire plant. Young stems are candied and used to decorate cakes, the leaves can be used in scented pillows, and the roots can be cooked with butter and/or mixed with tart berries or rhubarb to cut down on their acidity.

In the angelica’s first growing year, this member of Apiaceae only grows leaves that can be harvested. Angelic harvesting of leaves should occur in the late spring or early summer.

Harvesting angelica’s tender stems must wait until the second year and are then candied. Cut the stalks in mid to late spring while they are young and tender. Another good reason for pruning angelica stems is so the plant will continue to produce. Angelica that is left to flower and go to seed will die.

If you are harvesting angelica for its roots, do so the first or second fall for the most tender roots. Wash and dry the roots well and store them in an air-tight container.

Unlike many other herbs, angelica likes moist soil. In nature, it is most often found growing alongside ponds or rivers. Keep the plant well-watered and it should reward you with years of harvesting.

Printer Friendly Version
Read more about Angelica
<PreviousNext>
Did you find this helpful? Share it with your friends!
FacebookTweetPinEmail
Related Articles
Newest Articles
You might also like…
Additional Help & Information