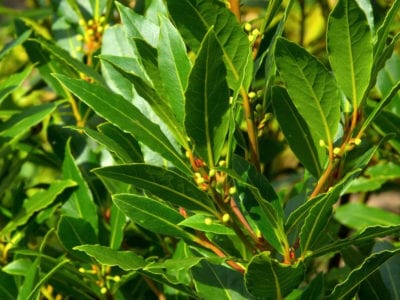 The Mediterranean tree known as bay laurel, or Laurus noblilis, is the original bay that you call sweet bay, bay laurel, or Grecian laurel. This is the one you are looking for to scent your stews, soups, and other culinary creations. Are there other bay tree varieties? If so, are other bay tree types edible? There are actually several different kinds of bay tree. Read on to find out about other types of bay and additional bay tree information.

In Florida, there are several types of bay, but they are not of the same genus as L. nobilis. They do, however, look remarkably similar with their large, elliptical, evergreen leaves. They also grow in overlapping habitats leading to confusion. These different kinds of bay tree are bay in name only, such as red bay, loblolly bay, and swamp bay.

Luckily, they have certain features that make them identifiable. For instance, Magnolia grandiflora, which is known as southern magnolia or bull bay, and Persea borbonia, known as red bay, are found in uplands. Others, like Gordonia lasianthus, or loblolly bay, and Magnolia virginiana (sweetbay) are commonly found in wetlands. M. virginiana and P. borbonia also have bluish gray lower leaf surfaces while the others do not. Again, none of these are to be confused with L. nobilis.

L. nobilis is the Mediterranean tree also known as bay laurel that is used to flavor foods. It is also the bay tree type used by the ancient Romans to make ‘laurels,’ the leafy crown made to symbolize victory.

In California, there is another “bay” tree called Umbellularis californica, or California bay. It has been used and sold commercially as L. nobilis. It also has the same typical bay flavor and aroma but is harsher in flavor. U. californica can, however, be used as a substitute for common bay laurel (L. nobilis) in cooking.

To truly identify which one is which, examine the fruit and flowers whenever possible. California bay fruit is ½ to 3/4 inches (1-2 cm.) across; bay laurel looks similar but half that size. If you get a chance to look at the flowers, you will notice that California bay has both stamens and pistils, so it can produce fruit. Bay laurel only has female flowers, with one pistil on some trees, and male flowers with just stamens on other trees. You may need a hand lens to really inspect the flowers for their sex organs, but if you see both a pistil and a ring of stamens, you’ve got a California bay. If not, it’s a bay laurel.

Printer Friendly Version
Read more about Bay Trees
<PreviousNext>
Did you find this helpful? Share it with your friends!
FacebookTweetPinEmail
Related Articles
Newest Articles
You might also like…
Additional Help & Information