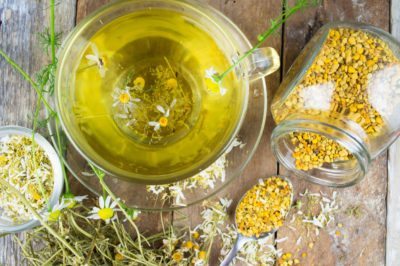 Chamomile is a pretty herb that graces the herb garden with masses of small, daisy-like flowers throughout much of the growing season. Traditionally, many generations have appreciated chamomile for its curative qualities, and to this day, people rely on chamomile tea to calm frazzled nerves and relax at bedtime. Is chamomile edible though, and if so, what parts of chamomile are edible?

It’s wise to know the facts before eating chamomile plants. (Caution: Never eat any plant if you aren’t 100 percent sure!) Read on for the specifics of edible chamomile.

Yes, chamomile leaves and flowers are both perfectly safe to eat, with a couple of caveats.

Now that the warnings are out of the way, here are some suggestions for using edible chamomile: