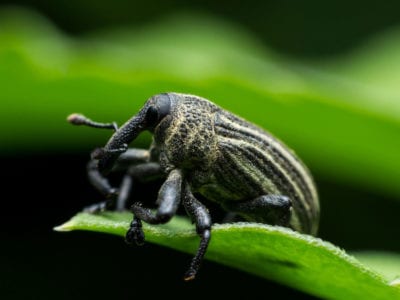 The meek shall inherit the earth, or in the case of the boll weevil, the cotton fields of the southern United States. The story of the boll weevil and cotton is a long one, lasting many decades. It’s hard to imagine how this harmless little insect is responsible for ruining the livelihood of many southern farmers and costing millions of dollars in damages.

The little gray beetle with the funny snout entered the United States from Mexico in 1892. From state to state, the early twentieth century saw the advancement of the boll weevil. Damage to cotton crops was widespread and devastating. Cotton farmers, who didn’t succumb to bankruptcy, switched to other crops as a means of staying solvent.

Early methods of control included controlled burns to eradicate the beetles and the use of homemade pesticides. Farmers planted cotton crops earlier in the season, hoping their crops reached maturity before the annual beetle outbreaks.

Then in 1918, farmers began using calcium arsenate, a highly toxic pesticide. It provided some relief. It was the scientific development of chlorinated hydrocarbons, a new class of pesticides, which lead to the widespread use of DDT, toxaphene, and BHC.

As boll weevils developed resistance to these chemicals, chlorinated hydrocarbons were replaced with organophosphates. While less damaging to the environment, organophosphates are toxic to humans. A better method for controlling boll weevil damage was needed.

Sometimes good things do come from bad. The boll weevil’s invasion challenged the scientific community and brought about change to the way farmers, scientists, and politicians work together. In 1962, the USDA set up the Boll Weevil Research Laboratory for the purpose of boll weevil eradication.

After several small trials, the Boll Weevil Research Laboratory began a large-scale boll weevil eradication program in North Carolina. The emphasis of the program was the development of a pheromone based bait. Traps were used to detect populations of boll weevils so fields could be effectively sprayed.

Are Boll Weevils a Problem Today?

The North Carolina project was a success and the program has since expanded to other states. Currently, boll weevil eradication has been completed in fourteen states:

Today, Texas remains the forefront of the boll weevil battle with successful eradication covering more territory each year. Setbacks to the program include redistribution of boll weevils into eradicated areas by hurricane force winds.

Gardeners, living in states where cotton is grown commercially, can help the eradication program by resisting the temptation to grow cotton in their home gardens. Not only is it illegal, but home-grown cotton plants aren’t monitored for boll weevil activity. Year-round cultivation results in super sized cotton plants which can harbor large boll weevil populations.

Printer Friendly Version
Read more about Cotton
<Previous
Did you find this helpful? Share it with your friends!
FacebookTweetPinEmail
Related Articles
Newest Articles
You might also like…
Additional Help & Information