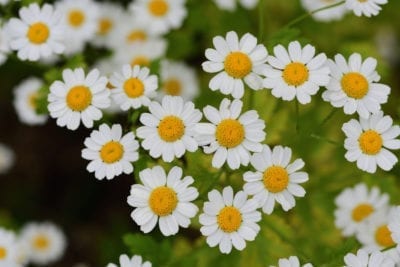 As the name suggests, herbal feverfew has been used medicinally for centuries. Just what are the medicinal uses of feverfew? There are a number of traditional benefits of feverfew that have been used for hundreds of years plus new scientific research has given rise to the promise of yet another feverfew benefit. Read on to learn about feverfew remedies and their benefits.

The herbal feverfew plant is a small herbaceous perennial that grows to about 28 inches (70 cm.) in height. It is notable for its prolific small daisy-like blooms. Native to Eurasia, from the Balkan Peninsula into Anatolia and the Caucus, the herb has now spread throughout the world where, due to its ease of self-sowing, it has become somewhat of an invasive weed in many regions.

The earliest use of feverfew medicinally is not known, however, the Greek herbalist/physician Diosorides wrote of using it as an anti-inflammatory.

In folk medicine, feverfew remedies made from the leaves and flower heads were prescribed to treat fever, arthritis, toothache, and insect bites. While the benefits of using feverfew have been passed down generation to generation, there is no clinical or scientific data to support their efficacy. In fact, scientific studies have shown that feverfew is not effective for treating rheumatoid arthritis, although it has been used in folk medicine for arthritis.

New scientific data does, however, support feverfew’s benefit in treating migraine headaches, at least for some. Placebo controlled studies have concluded that dried feverfew capsules are effective in preventing migraines or lessening their severity if taken prior to the onset of the migraine.

Still further research suggests that feverfew may aid in fighting cancer by preventing the spread or recurrence of breast, prostate, lung, or bladder cancer as well as leukemia and myeloma. Feverfew contains a compound called parthenolide that blocks the protein NF-kB, which regulates cell growth. Basically, NF-kB regulates gene activity; in other words, it promotes the production of proteins that block cell death.

Usually, that’s a good thing, but when NF-kB becomes overactive, cancer cells become resistant to chemotherapy drugs. Scientists investigated and discovered that when breast cancer cells were treated with parthenolid, they were more susceptible to drugs used to fight cancer. The survival rate increases only when BOTH chemotherapy drugs and parthenolide are used in combination.

So, feverfew might have bigger benefits than just treating migraines. It may just be that modest feverfew is a major part of the key to winning the battle against cancer in the future.