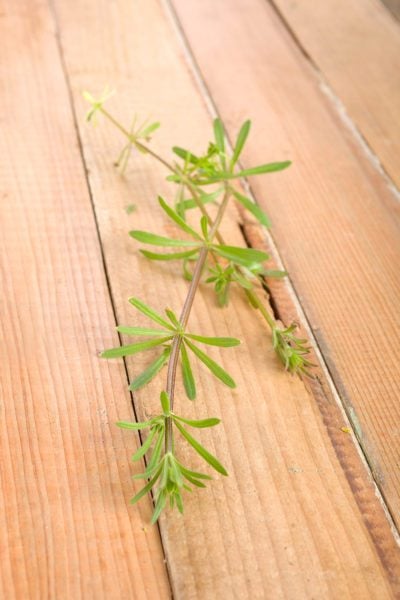 A versatile herb with a host of medicinal uses, goosegrass (Galium aparine) is most famous for its Velcro-like hooks that have earned it a number of descriptive names, including cleavers, stickweed, gripgrass, catchweed, stickyjack, and stickywilly, among others. Read on for more information and learn how to use goosegrass herb medicinally and in the kitchen.

Goosegrass is native to regions of Africa, Asia, and Europe, and most likely to New Zealand, Australia, and Scandinavia. It’s unclear whether this annual herb has naturalized in North America or if it is native, but either way, it can now be found in the United States, Canada, and Mexico, as well as South and Central America.

At maturity, goosegrass is a good-sized plant that reaches a height of about 4 feet (1 m.) and can spread out to nearly 10 feet (3 m.).

Goosegrass benefits are many and the plant has been used medicinally everywhere it grows. It is a potent diuretic and is also used to treat cystitis and other urinary issues, as well as gallstones, bladder, and kidney problems. It should be used in small amounts and should be avoided by diabetics.

Traditionally, goosegrass herbal uses include a poultice for skin problems such as psoriasis and eczema, as well as minor cuts and scrapes.

Since goosegrass is high in vitamin C, mariners valued it as a treatment for scurvy in days of yore. Many modern herbal practitioners rely on goosegrass for its anti-inflammatory qualities and to treat respiratory problems, including coughs, asthma, flu, and the common cold.

Using Goosegrass Herbs in the Kitchen

Interested in using goosegrass herbs in the kitchen? Here are a few ideas:

We’ve explored the many goosegrass benefits, but it’s also important to consider why goosegrass isn’t always welcome (other than the fact that it sticks to everything it touches).

Goosegrass can be invasive and is considered a noxious weed in many areas. Check with your local cooperative extension if you’re thinking about planting goosegrass seeds, as the plant may be prohibited or restricted, especially across the southeastern United States and much of Canada.