Types Of Lavender: Difference Between French And English Lavender 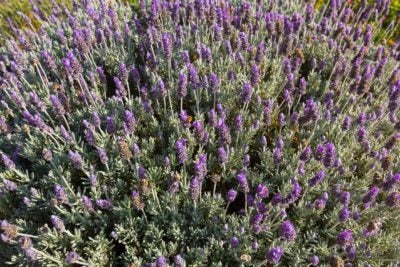 When it comes to French vs. English lavender there are some important differences. Not every lavender plant is the same, although they are all great to grow in the garden or as houseplants. Know the differences between these popular types to choose the best one for your conditions and needs.

Are English and French Lavender Different?

They are related, but different types of lavender. French lavender is Lavendula dentata and it is not actually that commonly cultivated, although we often think of France when picturing fields of lavender. English lavender is Lavendula angustifolia. This variety is much more commonly cultivated and is typical in gardens and containers. Here are some other important differences:

Hardiness. A big difference between French and English lavender is that the latter is much hardier. French lavender is only hardy through about zone 8 and won’t tolerate cold winters.

Size. French lavender is large and will grow from about 2 to 3 feet (61-91 cm.) tall and wide, while English lavender stays much smaller and more compact, although it may grow up to 2 feet (61 cm.).

Bloom time. The flowers on these plants are similar in size, but they last much longer on French lavender. This variety has one of the longest bloom times, starting in spring and continuing to produce flowers throughout the summer.

Scent. If you’re looking for the characteristic lavender smell, choose English lavender. It produces the strong scent that permeates the air, while French lavender has a much lighter scent, which while nice, is more reminiscent of rosemary.

Other Types of Lavender

French and English are just two of many varieties of this popular plant. You’ll also see Spanish lavender, which like French lavender has a softer scent and is used more for landscaping than for producing the scented oil.

Lavandin is a hybrid cultivar that was developed to produce even more oil than English lavender, so it has a very potent aroma.

French and English lavender varieties are both great plants, but they are not the same. Along with the other types of lavender, you have plenty of options to choose the right variety for your home or garden.