Lavandin Plant Care: Lavandin Vs. Lavender In The Garden 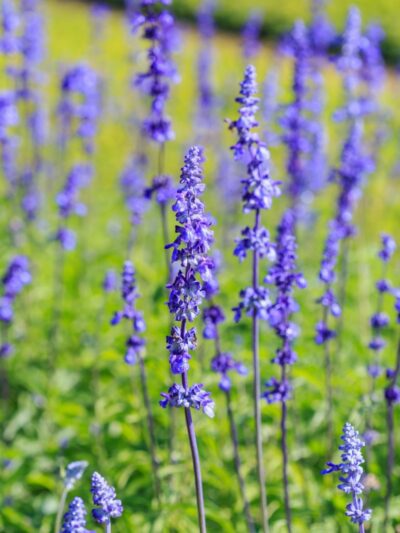 The scent is unmistakable but is your lavender really a lavender? You may have a hybrid of lavender called lavandin. Flower spikes, leaves, and aroma can’t separate lavandin vs. lavender, but the size of the plants and the amount of camphor in the oil can give a clue as to which is which. Lavandin is most commonly referred to as French lavender and has a featured place in the perfume and cosmetics trade. We’ll go over some lavandin information so you can decide which is best, lavender or lavandin.

Lavandin is related to the common lavender. What is lavandin? French lavender plants are sterile hybrid crosses between English lavender (L. augusifolia) and Portuguese lavender (L. latifolia). The result is Lavandula x intermedia, or lavandin.

There are many uses for lavandin, most in the cosmetics industry, due to the high amount of aromatic oils in the plant. Lavandin only produces flowers once per year, but the plant is filled with blooms and flowers which have a higher camphor content than English lavender. This makes it suited for aromatherapy treatments, cosmetics and cleaning products.

Another difference with lavandin vs. lavender is the size of the bush. Lavandin tends to produce larger plants with more flowers at one time. The plants form small shrubs that may grow 16 to 18 inches (41-46cm.) in height and have spiked flowers in hues of lilac purple to violet blue. The foliage is grayish green and resinous.

The aromatherapy industry has made lavandin their own, with high demand for the extremely scented herb. Some of the major species for production of the oil are Grosso, Provenance, Phenomenal, and Giant Hidcote.

While lavender is used for medicinal purposes as well as cosmetic, lavandin is too strong for medical applications. Therefore, it is bred strictly for its aromatic properties and was a large part of the French perfume industry.

Lavandin can be used to repel insect pests and may be antiseptic, which makes it an excellent cleaner. The aroma itself is relaxing and helps relieve body aches and stress.

Lavandin should be planted in a full sun location in well-draining soil. The plants are quite drought tolerant once established but best growth will be achieved by keeping lavandin evenly moist but never soggy.

Prune plants when they are young to keep them from getting woody and unproductive over time. Prune stems back one third in early spring. After blooming, lightly shear the spent flower heads. With proper shearing and pruning, the plant can remain a tight mounded form with lively growth. Left alone and unpruned, many lavandin get woody and gradually stop producing flowers and even leaves.

Lavandin is useful in either containers or in a bright spot in the garden. Harvest and dry the flowers to extend the scent and bring it into the home interior.