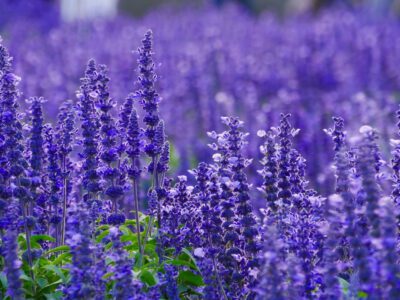 Xylella (Xylella fastidiosa) is a bacterial disease that affects hundreds of plants, including trees and shrubs and herbaceous plants such as lavender. Xylella on lavender is extremely destructive and the potential for far-reaching damage to lavender growers and lavender gardens is tremendous.

Xylella is thought to be one of the most dangerous and harmful bacterial diseases in the world. Although it is native to America, it has spread to a number of countries in Europe, including Italy and France.

The bacterium is of special concern in the U.K., where authorities are taking steps to prevent an outbreak, including controls on imported plants, a ban on purchase of plants from countries where Xylella is known to exist, and stringent requirements for inspections. The United Nations is also working to prevent global spread of the bacterium.

Xyella affects the plant’s ability to absorb water and nutrients. The bacterium is spread from plant to plant by sap-sucking insects. The glassy-winged sharpshooter has been identified as a major carrier, as well as a type of spittlebug known as meadow froghopper.

The bacterium is native to the United States, where it has created problems in the southeastern states and California, particularly in riparian areas.

Lavender plants with Xylella display stunted growth and scorched, wilted foliage, eventually leading to plant death. Symptoms can vary somewhat depending on climate and other factors.

If lavender Xylella symptoms get started in your area, there may be little you can do. However, you can do your part to prevent spread by controlling sap-sucking pests, limiting growth of weeds and tall grass that harbor insect pests, and maintaining strong, healthy, disease-resistant lavender plants.

Encourage beneficial insects to visit your lavender garden. Tiny parasitic wasps and dragonflies, in particular, have been identified as an important predator of the bacterium and may be crucial to preventing Xylella on lavender plants in your garden.