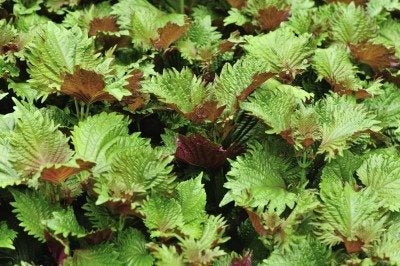 What is a shiso herb? Shiso, otherwise known as perilla, beefsteak plant, Chinese basil, or purple mint, is a member of the Lamiaceae or mint family. For centuries, growing perilla mint has been cultivated in China, India, Japan, Korea, Thailand, and other Asian countries but is more often classified as a weed in North America.

Perilla mint plants are often found growing along fences, roadsides, in hay fields or pastures and are, hence, more often termed a weed in other countries. These mint plants are also quite toxic to cattle and other livestock, so it’s no wonder why shiso is considered more of a noxious, undesirable weed in some areas of the world.

Prized in Asian countries not only for its culinary uses, the oil extracted from these mint plants is also utilized as a valuable fuel source, while the leaves themselves are used medicinally and as a food coloring. The seeds from the perilla beefsteak plant are eaten by people as well as a bird food.

Perilla mint plants (Perilla frutescens) may be grown as ornamentals due to their erect habitat and green or purplish green to red serrated leaves. Growing perilla mint has a distinctive minty aroma, especially when mature.

In Japanese cuisine, where shiso is a common ingredient, there are two types of shiso: Aojiso and Akajiso (green and red). More recently, ethnic food markets in the United States carry many perilla mint plant products from fresh greens, oil, and condiments such as pickled plums or plum sauce. Perilla added to condiments not only colors the product but adds an antimicrobial agent to pickled food.

Oil from perilla mint is not only a fuel source in some countries but has recently been found to be an excellent source of omega-3 fatty acids and is now sold as such to health conscious Western consumers.

Additionally, perilla mint plant oil is used similarly to tung or linseed oil and also in paints, lacquers, varnish, inks, linoleum, and waterproof coating on cloth. This unsaturated oil is slightly unstable but is 2,000 times sweeter than sugar and four to eight times sweeter than saccharin. This high sugar content makes it a great candidate for alcohol production for consumption, but more usually used in the manufacture of fragrances or perfumes.

How to Grow Perilla Shiso

So, sounds intriguing, yes? The question now then is how to grow perilla shiso? Growing perilla mint plants are summer annuals which do best in warm, humid climates.

When cultivating perilla, its downfall is its limited seed viability in storage, so store seeds at lower temperatures and humidity to improve the storage life and plant before they are a year old. Seeds for perilla plants can be sown as soon as possible in the spring and will self pollinate.

Plant perilla seedlings 6 to 12 inches (15-31 cm.) apart in well-drained but moist soil with full to partial sun exposure or direct sow them in well-drained soil and lightly cover. The shiso seeds will germinate rapidly at 68 degrees F. (20 C.) or even a little cooler.

Perilla shiso care requires a medium amount of water. If the weather is exceedingly warm and humid, the plants’ tops should be pinched back to encourage bushier, less rangy plant growth.

Flowers of the growing perilla mint bloom from July to October and are white to purple, attaining their maximum height of 6 inches (15 cm.) to 3 feet (1 m.) tall before dying off during the coming frost. After the first year of growing perilla mint plants, they will easily self-seed in successive seasons.