Stinging Nettle Tea: Health Benefits Of Nettle Tea And How To Brew A Cup 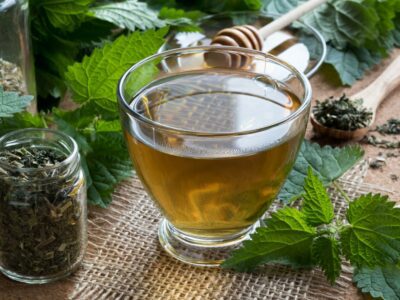 Stinging nettle (Urtica dioica) is a medicinal herb that grows around the globe in temperate regions. Many are quite familiar with the stinging sensation brought on by brushing up against the plant. This is the result of tiny hairs which release histamine when coming in contact with skin.

Some stinging nettle tea benefits are mentioned above. Other benefits ascribed to nettle are as an expectorant, astringent, tonic, antispasmodic, and diuretic. The most common use is nettle tea for seasonal allergies or rhinitis.

Studies have shown that nettle may treat some prostate woes. There is a long list of other purported benefits from drinking stinging nettle tea, ingesting the leaves or applying a tincture that have yet to be proven through research.

A couple notes of caution regarding drinking stinging nettle tea. Pregnant women should never drink nettle tea, and lactating women should use the herb sparingly. Drinking too much nettle tea can result in a condition called “urticaria,” painful red hives on the skin. Also avoid using mature leaves due to calcium carbonate concretions which can irritate kidneys resulting in kidney stones.

How to Make Nettle Tea

Access to fresh nettle is a must for any nettle tea recipe. You might be able to forage for nettles, but be aware that they may have been sprayed with a chemical. The best way to procure nettles is from someone you know or to grow your own. Use gloves to protect your hands when collecting nettle leaves.

Choose the young, tender leaves when making stinging nettle tea. Wash the leaves, put them in a cooking pot filled with just enough water to cover them.

Boil the water until it becomes slightly green, then remove the nettles. If you leave the nettles to steep too long the tea will become bitter.

Add the sweetener of your choice and some fresh lemon, if you desire. The lemon is tasty, but more interestingly is how it interacts with the stinging nettle tea, changing the color from green to bright pink!

Printer Friendly Version
Read more about Nettle
<Previous
Did you find this helpful? Share it with your friends!
FacebookTweetPinEmail
Related Articles
Newest Articles
You might also like…
Additional Help & Information