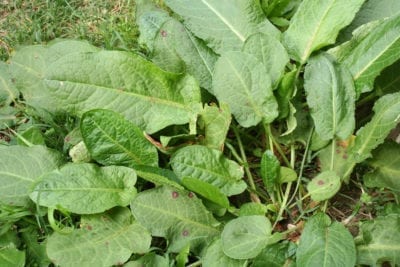 We’ve probably all seen it, that ugly, reddish brown weed that grows alongside roads and in roadside fields. Its red-brown color and dried out, shaggy appearance makes it look like it’s been heavily doused with herbicides or burned. From the look of it, we expect it to wilt over dead or crumble to ash any second, yet it persists in this dead-looking stage, sometimes even poking its dried brown tips right through snow banks of winter. This ugly weed is curly dock, and when the plant is in its mature reddish brown phase, it isn’t dead; in fact, curly dock can seem nearly impossible to kill.

Curly dock (Rumex crispus) is a perennial native to Europe, Asia, and parts of Africa. In its native range, different parts of curly dock are used as food and/or medicine. However, outside of this range it can be a problematic, aggressive weed.

Also known as sour dock, yellow dock, and narrowleaf dock, one reason controlling curly dock weeds is so hard is because plants may bloom and produce seeds twice a year. Each time, they may produce hundreds to thousands of seeds which are carried on wind or water. These seeds can then lie dormant in the soil for 50 years or more, before germinating.

Curly dock weeds are one of the most widely distributed weeds in the world. They may be found along roadsides, parking lots, pastures, hay fields, crop fields, as well as in landscapes and gardens. They prefer moist, regularly irrigated soil. Curly dock weeds can be a problem in pastures, as they can be harmful, even toxic, to livestock.

In crop fields, they can also be a problem but specifically in no-till crop fields. They are rare in tilled crop fields. Curly dock weeds also spread underground by their roots, forming large colonies if left unchecked.

How to Kill Curly Dock Plants in the Garden

Getting rid of curly dock by hand pulling is not a good idea. Any part of the root that is left in the soil will only produce new plants. You also cannot employ animals to graze on curly dock as a control because of the plant’s toxicity to livestock.

The most successful methods of controlling curly dock are mowing it down regularly, where applicable, and the regular use of herbicides. Herbicides should be applied at least twice a year, in spring and fall. For best results, use herbicides containing Dicamba, Cimarron, Cimarron Max, or Chaparral.