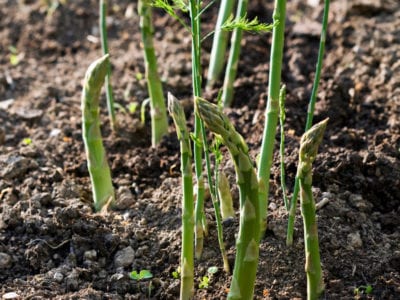 Tender, new asparagus shoots are one of the first crops of the season. The delicate stems rise from thick, tangled root crowns, which produce best after a few seasons. Growing asparagus plants from division is possible, but the most common method is from root crowns. Learn how to propagate asparagus in your zone for a wonderful spring perennial crop.

How to Propagate Asparagus

Asparagus root crowns must be one year old before they’ll produce any stems. Plants started from seed will need an extra year before they reach that point. Established asparagus plots yield even more plants when you dig up the crowns, divide, and replant them. All three methods of propagating asparagus plants are simple ways to introduce asparagus to your home garden.

You can start harvesting the spears when the plants are in the ground for two years. By the third year, you will be getting larger and thicker spears, but over time, they get smaller and less robust. This is when you know it is time to divide the original crown.

Older asparagus plants produce red berries, which contain seeds. These come from the spears after they are allowed to turn into ferns at the end of the season. Seeds are viable if they have not experienced freezing temperatures.

Collect the berries, crush them, and separate out the seed. Soak the seed to remove the rest of the pulp and then dry it out for a few days. Store the seed in a cool, dry location and then plant in spring.

The best results are from seeds started indoors and then transplanted out after all danger of frost has passed. Asparagus propagation by seed is cheap but it will require two years before you see the first shoots.

Asparagus propagation by division is one of the most common methods. When production of spears slows down over several years, it is time to cut the root into pieces.

Dig up the root in late fall after the last ferns have died back. Cut it into several pieces, each with plenty of healthy root attached. Replant them then or wait until spring after the last frost. Store the roots in a mesh or paper bag filled with sawdust if you chose the latter.

Roots from asparagus crown division will need another year to establish and produce spears.

No matter which method you use for propagating asparagus plants, they must have well-drained soil with a moderate pH. Amend the soil with generous amounts of compost, leaf litter, and other rich organic components.

Harvest the spears until they become small and spindly. Then allow them to fern. This allows the plant to gather energy for the following season’s spear production. Cut the ferns back when they die.

Remember, asparagus roots will spread over time but diminish in production. Divide them every three years or so for a non-stop harvest year after year.