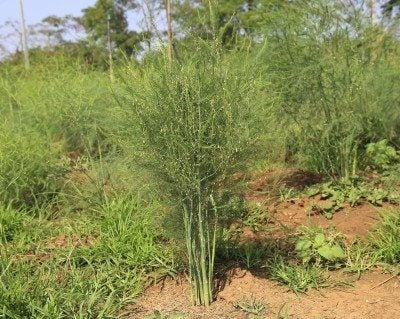 An old method of controlling weeds in the asparagus patch was to pour the water from an ice cream maker over the bed. The salty water did indeed limit the weeds but over time it collects in the soil and can cause problems. Know how to use salt on asparagus and when too much is too much for these delicious plants.

One of the first spring vegetables is asparagus. The crisp spears are perfect in a variety of preparations and adapt well to a host of cuisine types. Asparagus are perennials which grow from crowns planted 6 to 8 inches (15-20 cm.) beneath the soil surface. This means deep hoeing is not an option to get rid of weeds.

Using salt for weed control is an old farm tradition, and while the high salinity does kill some annual weeds, persistent perennial weeds may be resistant, and the practice leaves an excess of salt in the bed which can be detrimental to the asparagus. However, there are other safer methods than using salt on asparagus weeds.

It is not a good idea to use salt in asparagus soil unless you plan on testing the salinity of the soil annually and stop when it begins to reach high levels. High levels of salt in asparagus soil can impede percolation and water drainage. Over time the saline will build up to a level that will even kill a salt tolerant plant such as asparagus. That will destroy your crop of tender spears and waste the three years you had to wait for your bed to produce well.

Other Methods of Asparagus Weed Control

Our ancestral farmers knew how to use salt on asparagus and when to stop the practice to prevent poisoning the soil. Today, we have several different tools available to us and do not have to resort to salt for weed control.

You were given hands for a reason. One of the simplest methods of weed control that is non-toxic and creates no buildup of salt or other chemicals in the soil is hand weeding. It is even organic! Hand weeding is also effective, but it doesn’t work quite as well in large asparagus beds.

Light tilling can be done in early spring before the spears have begun to show. The shoots are quick growers and using salt on asparagus weeds can burn the tender new spears. Hand weeding is tedious, but useful to most home gardeners. The tough part is getting the roots of perennial weeds, but even removing the greenery will eventually weaken the root and kill the weed over time.

Modern farm practices include the use of pre-emergent herbicides to prevent weed seeds from sprouting. Corn gluten meal is non-toxic and has pre-emergent properties. It may safely be used on the entire bed every four weeks. Use caution when applying to beds with germinating seeds, as it will impede sprouting.

Another method is the use of post emergent herbicides. Use it after the last harvest when no spears are above the soil or in early spring broadcast it over the entire bed before shoots appear. Make sure no herbicide contacts the plant material or you could kill the crowns, as the products are systemic and will leach through the vascular system to the root. It is safe to use as long as the product only contacts soil and will remain in the soil to kill sprouting weeds.

Any of these methods is safer and more effective than salt in asparagus soil.