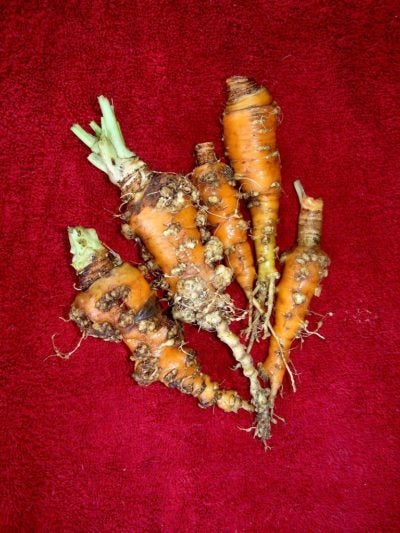 If you have discovered your carrot patch is yielding stumpy, rough looking, forked roots, you probably have a root knot nematode infestation. This pathogen is common in root crops but also in celery and lettuce. Symptoms vary slightly by plant variety, but in all cases crop production is reduced and the food looks unsightly. Root knot nematodes in carrots are particularly prevalent in northern regions. The good news is that you can control the pathogen to a certain extent.

Nematodes are tiny roundworms not visible with the naked eye. It takes a soil sample to positively identify the pests. They live in soil and feed on plant cells through several developing stages. The second stage juveniles are the only mobile stage and enter the roots. Later stages and adults become larger as the carrot root enlarges.

Any stage of nematode feeds on cells by piercing it with a mouthpart called a stylet. Females will break through the root and deposit eggs, which form galls. These become woody, hard and nearly unpalatable. There are almost 90 different nematode species that are directly associated with carrot development.

Recognizing parasitic nematodes in carrots is fairly obvious once you dig the roots up. On the surface of the soil, the foliage will be stubby and not well formed. Occasionally, it will also wilt. The roots will split and fork, looking like bizarre caricatures of possessed carrots. Some interesting forms appear but, overall, carrots affected by root knot nematodes will produce less edible roots, which are stunted and ugly.

In commercial growing, this represents less dollar yield and the roots collect more soil, requiring more extensive cleaning before the roots can be marketed. In the home garden, the less attractive roots can still be used, but some parts will be woody and preparation is more intense as opposed to the easily cleaned and peeled roots that are uninfected.

The most common treatments are crop rotation and allowing a field to lay fallow. Good sanitation practices such as cleaning machinery and tools is also useful. In some cases, solarization for 4 to 6 weeks can kill populations of some nematodes.

There are also several resistant crops that may be planted or a non-host plant can be installed. Such plants might be rye, fescue, corn, wheat, barley or sorghum. At this time, there are no resistant carrot varieties, but trials are underway and very soon these should be released.

There are a few soil fumigants that can be used up to 6 weeks before planting. They can be quite effective when used properly.

Printer Friendly Version
Read more about Carrots
<PreviousNext>
Did you find this helpful? Share it with your friends!
FacebookTweetPinEmail
Related Articles
Newest Articles
You might also like…
Additional Help & Information