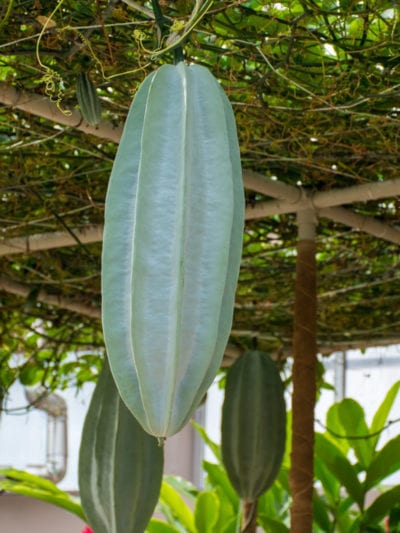 What is a Fluted Pumpkin?

Nigerian fluted pumpkin (Telfairia occidentalis) is commonly called Ugu, and is widely cultivated throughout West Africa for both its seeds and young leaves.

Nigerian fluted pumpkins have broad lobed leaves that are nutrient rich. They’re picked when young, and cooked into soups and stews. Plants grow to 50 feet (15m.) or longer.

A dioecious flowering plant, Nigerian fluted pumpkins produce both male and female blooms on different plants. Blooms are produced in sets of five creamy white and red flowers. The resulting fruit is green when young progressing to yellow as it matures.

Medicinally, parts of the plant are used to treat anemia, seizures, malaria and cardiovascular disease.

Tolerant of a variety of light conditions, Nigerian fluted pumpkins can be grown in shade, part shade or sun provided the soil is kept consistently moist.

Printer Friendly Version
Read more about Gourds
<PreviousNext>
Did you find this helpful? Share it with your friends!
FacebookTweetPinEmail
Related Articles
Newest Articles
You might also like…
Additional Help & Information