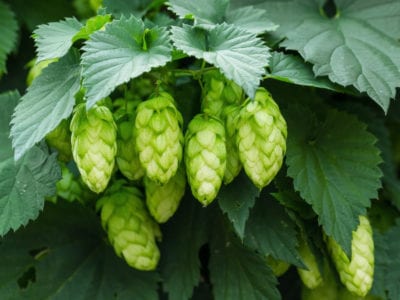 If you’re interested in planting a backyard hops plant (Humulus lupulus) or two, whether for home brewing, to make soothing pillows, or simply because they’re attractive vines, there are a few things you should know about how to plant hops.

As long as humankind has been brewing ale, someone’s been trying to improve it, but it wasn’t until 822 A.D. that a French monk decided to try wild growing hops plants. History tells us that it wasn’t until somewhere around 1150 A.D. that Germans began regularly brewing with hops. Flowering plants, however, weren’t introduced to the cultivated garden for another few hundred years. As a matter of fact, hops plant history records quite a controversy in 15th and 16th century England. The addition of these bitter perennials to ale, traditionally flavored with spices and fruit, caused such a stir that the product was finally, and legally, defined as beer.

Still, the controversy raged. King Henry VI had to order his sheriffs to protect hops growers and beer brewers, though it didn’t alter people’s opinions. Ale or beer? Beer or ale? Henry VIII liked both, and hops plant history should recognize him as doing the greatest service to the cause, although he had nothing to do with beer brewing per se. Henry VIII’s split with the Catholic Church also influenced business and the Church dominated the ale ingredients market!

Growing hops plants for profit became a growing cottage industry. Since the hops flowering plants were used as a preservative and not as flavoring, the search to develop plants with softer resins to mellow the bitter taste began. Of course, not everyone grew backyard hops plants for brewing purposes. Long before they were added to beer, wild growing hops plants were known to ease anxiety and stress and were used as a mild sedative.

The vines of hops flowering plants come in male or female and only the female produces the cones for use as hops. Flowering plant’s genders are easily recognized by the male’s five petaled flowers. It’s best to pull these out. They’re non-productive and it’s best if your female plants produce only non-fertilized seed. Propagation won’t be a problem. If given proper care, your backyard hops plant will send out rhizomes from which new plants will grow.

There are three basics factors for how to plant hops for maximum growth and production: soil, sun, and space.

In August and September, begin harvesting once cones become dry and papery and the leaves are richly scented. Once harvested, the cones must be further dried in a cool dry place. This process can take weeks and isn’t complete until the cones are brittle. One plant will produce 1 to 2 pounds (454-907 g.) of cones.

In late fall, after the harvest is complete and the weather begins to turn cold, cut the vines back to 2 feet (61 cm.) and bury the cut shoots in the ground. The following spring, the process begins again.

Printer Friendly Version
Read more about Hops
Next>
Did you find this helpful? Share it with your friends!
FacebookTweetPinEmail
Related Articles
Newest Articles
You might also like…
Additional Help & Information