Different Uses For Kale – How To Use Kale Plants Post Harvest 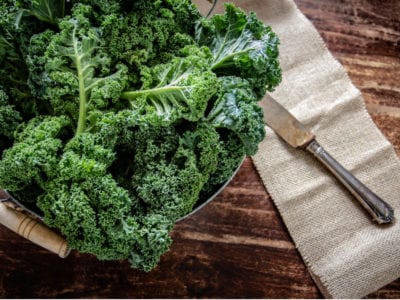 During the 1970’s, salad bars were a popular feature at many mid-priced restaurants. Oddly, one of the most nutritious veggies in the world was an integral part of many salad bars, but not as a salad offering. We’re talking about kale, of course. This super food found its way atop many salad bars as a garnish, surrounding the bowls of lettuce, salad toppings, and dressings. Thankfully, in today’s world we’ve discovered much better uses for kale.

Have you wondered what to do with kale that’s growing in your garden? Kale is chocked full of vitamins, minerals, and antioxidants. There is no doubt health-conscientious gardeners are growing this leafy green as a means to improve their diets. Yet, growing kale and using kale are two different undertakings. So, let’s explore how to use kale in the kitchen:

Kale chips– This healthy alternative to potato chips is simply addictive. With a little olive oil, salt, and a hot oven you’ve got a munchy, crunchy, after-school snack for the kids or for binge-watching your favorite streaming service.

Salads– Certainly the most traditional use of leafy greens is in salads. Due to its tough texture and bitter flavor, pick younger leaves and cut them into fine strips or lightly blanch older kale leaves in boiling water for one minute. Kale is a popular ingredient in salad kits, but you can easily create your own specialty salad for much less.

Soup– Add chopped kale to your favorite vegetable, potato, or bean soup recipe. Kale leaves remain sturdy yet have a tender and bitter-free flavor when added to soups and stews.

Side dishes– Garden veggies are an excellent accompaniment for traditional meat and potato meals. Boil, braise, steam, microwave, roast, or stir-fry chopped kale by itself or with other garden veggies for a nutritious and delicious side dish.

Smoothies– The ultimate in nutritious beverages, smoothies made with kale have become increasingly popular. Compliment the pungency of kale with sweet fruits like pear, mango, pineapple, and banana.

Are you still at a loss for ways to use that bumper crop of garden kale? Try using kale leaves as a sandwich wrap or place under fish and chicken during the cooking process. Kale can also be chopped or minced and used in the following dishes:

Wild kale originated in the eastern Mediterranean area with domestic varieties being cultivated as a food for at least 4,000 years. With such a rich history, it’s no wonder kale has been used in many traditional dishes. You may want to try your hand at some of these International classics: