Harvesting Leek Plants: Tips On When And How To Harvest Leeks 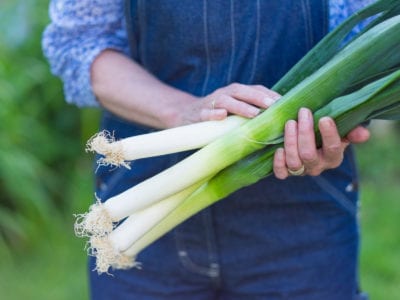 Leeks are members of the onion family, but instead of forming a bulb, they form a long shank. The French sometimes refer to this nutritious vegetable as the poor man’s asparagus. Leeks are rich in vitamins C, A, and folate, and they also contain kaempferol, a phytochemical believed to help prevent cancer. Let’s learn more about picking leek plants in the garden to take advantage of all they have to offer.

When to Harvest Leeks

Most leeks mature 100 to 120 days after sowing the seeds, but a few varieties mature in as few as 60 days. Begin the harvest when the stalks are about an inch (2.5 cm.) across. Depending upon your climate, you could be harvesting leek plants from late summer until early spring. Picking leek plants that mature at different times of the year lets you extend the harvest.

Leeks are best used fresh, but if you must store them, wrap them in a damp paper towel and place them in a plastic bag in the refrigerator for seven to ten days. Smaller leeks keep longest, so use the large ones first. Don’t trim them until you are ready to use them.

How to Harvest Leeks

Harvest leeks from loose soil by pulling them up. Pulling them out of heavy soil can injure the roots. Use a garden fork to reach under the roots and lift them from heavy clay soil. Shake the plants and brush off as much soil as possible and then rinse them thoroughly. Slice leeks in half lengthwise immediately before use and rinse out any remaining soil.

Begin the garden leek harvest early by cutting a few of the leaves before the plant is ready to harvest. Use a sharp knife to cut the leaves from the plant. Harvesting too many leaves stunts the plants, so take just a few leaves from each one.

Leeks have a limited storage life, but you can overwinter part of the crop in the garden. As winter weather approaches, hill up the soil around the plants and cover them with a thick layer of mulch. Use this method to extend the harvest and enjoy fresh leeks well into winter. Some varieties overwinter better than others. Look for varieties such as ‘King Richard’ and ‘Tadorna Blue,’ which are bred for overwintering.

Now that you know when and how to harvest leeks in the garden, you can enjoy the benefits of a healthy lifestyle.