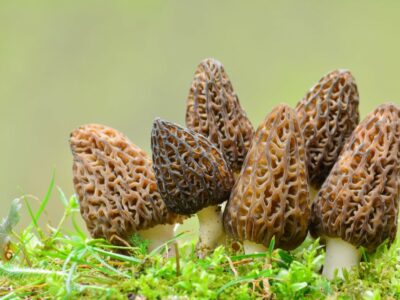 Mushrooms are versatile fungi that tend to add depth of flavor and umami (savory flavor) to recipes. Morel mushrooms have an earthy note and are considered a more “meaty” mushroom.

Morel mushroom growing conditions are difficult to pinpoint. Some are associated with certain trees, while others defy the rules and appear in disturbed soils. With all the fungi’s unique needs, some expert tips are necessary on how to grow morel mushrooms.

If you love hearty, flavorful mushrooms, you may wonder, “Where do morels grow?”

Avid mycologists are stumped by that question, too. Traditionally these mushrooms have resisted cultivation, but scientists are hard at work learning more about growing morel mushrooms.

Where Do Morels Grow?

In the wild, morel mushrooms are considered one of the more prized fungi discoveries. They are also one of the easiest to identify, with a characteristic honeycomb ridges on an elongated cap. In spring, morels may be found at the base of dead apple, elm, or black cherry trees. They can also be found where forest fire has occurred, or even in moist bark. But the morel mushrooms’ growing conditions vary from region to region. One thing is for sure. The fungi need shade and moist sites. Such differences make growing morel mushrooms a challenge, even for professional growers.

How to Grow Morel Mushrooms

There have been some successful cases producing the mushrooms outdoors, but few indoor victories. You can purchase a morel kit, which will supply the mycelium, or spawn. Such kits contain grain, sawdust, or woodchips to house the mycelium.

The outdoor bed is prepared in late summer to fall in a region that experiences definite seasonal changes. Select a shady spot and remove rocks, roots and impediments. Mix in some wood ash since morels are known to form in fire struck areas. Make sure the soil is well draining. Mix the mycelium with some wood chips and spread over the prepared area. Keep it moderately moist and wait. Some growers have success, while others report failure.

Here’s where things get more challenging. Due to their persnickety nature, morels aren’t even a guaranteed in their natural range. Temperature and moisture changes, combined with other fungi competition and pest problems often result in zero morels.

A morel kit and container of soil is one option but it will likely yield no results. Another option is a mushroom slurry where you steep morels in non-chlorinated water with a pinch of salt and molasses for a couple of days. Strain the liquid and plant the spores. Really, only one method where a sterile site and collection of spores that are transferred to agar have revealed any triumph. In time, modern science will likely reveal a fool proof method of growing morels indoors.