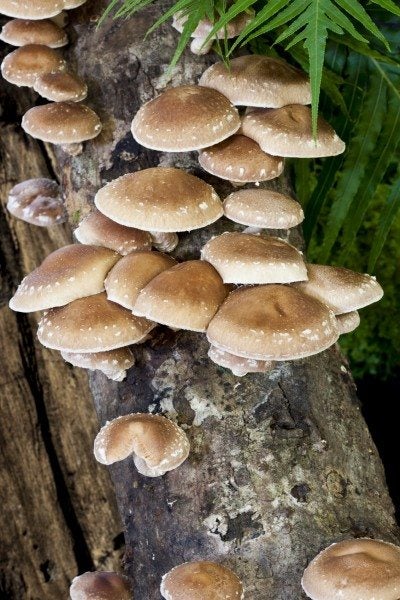 Shiitakes (Lentinus edodes) are highly prized in Japan where about half the world’s supply of shiitake mushrooms is produced. Up until fairly recently, any shiitake found in the United States was imported either fresh or dried from Japan. About 25 years ago, demand for shiitakes made it a viable and profitable enterprise for commercial cultivation in this country. The cost of a pound of shiitakes is generally much more than common button mushrooms, which may make you wonder about shitake mushrooms growing. Read on to find out how to grow shiitake mushrooms at home.

How to Grow Shiitake Mushrooms

Shiitakes are wood-decay fungi, meaning they grow on logs. Growing shiitake mushrooms takes place either on logs or in bags of nutrient-enriched sawdust or other organic material, called bag culture. Bag culture is a complex process requiring specific conditions of controlled temperatures, light, and moisture. The inexperienced mushroom grower would be advised to start with growing shiitakes on logs.

Shiitakes come from the Japanese, meaning “mushroom of the shii” or oak tree where the mushroom is likely to be found growing wild. So, ideally, you will want to use oak, although maple, birch, poplar, aspen, beech, and several other species are suitable. Avoid live or green wood, deadfall wood, or logs with lichen or other fungi. Use either freshly cut trees or limbs that are between 3-6 inches (7.5 to 15 cm.) across, cut into 40-inch (101.5 cm.) lengths. If you are cutting your own, do so in the fall when the sugar content is at its peak and most advantageous to promoting fungal growth.

Allow the logs to season for a period of about three weeks. Be sure to lean them against each other. If they are left on the ground, other fungi or contaminants can infiltrate the logs, rendering them unsuitable for shiitake growing.

Procure your mushroom spawn. This can be purchased from a number of online suppliers and will be either in the form of dowels or sawdust. If using sawdust spawn, you will need a special inoculation tool that you can get from the supplier as well.

Once the logs have seasoned for three weeks, it’s time to inoculate them. Drill holes every 6-8 inches (15-20.5 cm.) all around the log and two inches (5 cm.) from either end. Plug the holes with either the dowels or sawdust spawn. Melt some beeswax in an old pot. Paint the wax over the holes. This will protect the spawn from other contaminants. Stack the logs against a fence, tepee style, or lay them on a bed of straw in a damp, shaded area.

How Long Do Mushrooms Take to Grow?

Now that you have your shiitake logs situated, how long until you get to eat them? Mushrooms should appear sometime between 6-12 months after inoculation, usually after a day of rain in the spring, summer or fall. While it takes some time accompanied by patience to grow your own shiitake, in the end, the logs will continue to produce for up to 8 years! Well worth the wait and minimal care for years of harvesting your own delicious fungi.