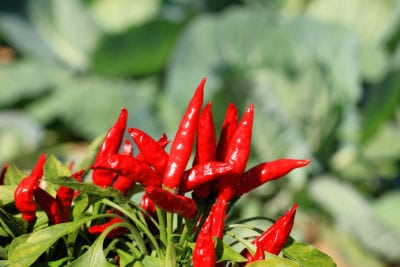 When these chili peppers are young and green, they are often used for cooking. The ripe, red peppers are generally dried and used to spice up a variety of dishes. Hawk claw chili peppers grow on bushy plants that reach heights of about 24 inches (61 cm.). The plant is attractive and its compact growth is well suited for containers.

Plant seeds indoors in January or February, or start with small plants from a greenhouse or nursery. You can then plant the chili peppers outdoors after all danger of frost has passed in spring. If you’re short on space, you can grow them in a sunny indoor location.

Pinch the growing tips of young plants when they’re about 6 inches tall (15 cm.) to produce fuller, bushier plants. Remove early blooms from small plants, as these draw energy from the plant.

Water regularly, but don’t overdo, as overwatering invites mildew, rot and other diseases. As a general rule, chili peppers perform best when the soil is slightly on the dry side, but never bone dry. A thick layer of mulch will suppress weeds and conserve moisture.

Watch for pests such as aphids or spider mites.

Harvest Takanotsume chili peppers before the first frost in autumn. If necessary, harvest the peppers and let them ripen indoors, in a warm, sunny spot.