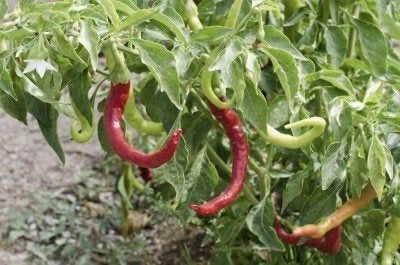 Familiar in many foods from the famous Hungarian goulash to a dusting atop deviled eggs, have you ever wondered about paprika spice? For instance, where does paprika grow? Can I grow my own paprika peppers? Let’s read on to learn more.

Where Does Paprika Grow?

Paprika is a variety of mild pepper (Capsicum annuum) that is dried, ground, and used with food either as a spice or garnish. Most of what we are familiar with comes from Spain, or yes, you guessed it, Hungary. However, these are by far not the only countries that grow paprika peppers and, for the most part, Hungarian paprika is grown in the United States.

It isn’t known exactly what the derivation of the word paprika arises from. Some say it is the Hungarian word meaning pepper, while still others say it is from the Latin ‘piper’ meaning pepper. Whatever the case, paprika has been used in a variety of cuisine for hundreds of years, adding a serious boost of vitamin C to dishes. In fact, paprika peppers have more vitamin C than lemon juice by weight.

Another interesting bit of paprika pepper info is its use as a hair color. By itself, it imbues hair with a reddish hue, and combined with henna unleashes the fiery red head.

Paprika is available in several incarnations of the pepper. Regular unsmoked paprika is called Pimenton. There are gradations of regular paprika from mild, moderately spicy, to very spicy. Contrary to what you might think, the red color of the spice does not correspond to how spicy it is. The darker, browner tones of paprika are actually the spiciest while the red-toned paprikas are milder.

The spice also comes as smoked paprika, my favorite, which is smoked over oak wood. Smoked paprika is delicious in everything from potato dishes to eggs and pretty much any meat. It also lends vegetarian cuisine another layer of flavor, resulting in truly robust dishes.

Hungarian paprika fruit is a little smaller than Spanish paprika, 2 to 5 inches (5-13 cm.) long versus 5 to 9 inches (13-23 cm.) long. Hungarian peppers are oblong to pointy in shape with thin walls. Most are mild in flavor, but some strains can be quite hot. The Spanish paprika peppers have thicker, fleshier fruits and are more susceptible to disease than its counterpart, probably accounting for its popularity with growers.

How Do I Grow Paprika Spice?

When growing your own paprika peppers, you may plant either Hungarian or Spanish varieties. If you’re going to make the peppers into paprika, however, ‘Kalosca’ is a thin-walled sweet pepper that is easily dried and ground.

There is no secret to growing paprika peppers. They are grown much like other peppers, which means they like a well-draining, fertile soil in a sunny area. Provided that you live in a warm climate, you may start paprika outdoors from seed in zones 6 and higher. In cooler climes, start the seeds inside or purchase seedlings. Wait until all danger of frost has passed before transplanting, as all peppers are susceptible to frost.

Space plants 12 inches (31 cm.) apart in rows 3 feet (1 m.) apart. Harvest time for your peppers will be staggered from summer into fall. Fruit is mature when it is bright red in color.

Dry your peppers in mesh bags hung in the attic, heated room, or other area with temperatures of 130 to 150 degrees F. (54-65 C.) for three days to one week. You can also use a dehydrator. When complete, 85 percent of the pod weight will have been lost.