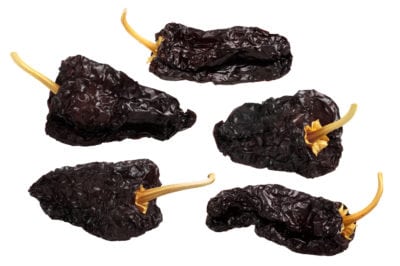 What is a Mulato Pepper?

Ancho, pasilla, and mulato chili peppers are known as the “Holy Trinity” of the classic Mexican sauce mole. Originating from a region of Mexico known as the “Land of the Seven Moles,” mole is a traditional Mexican sauce served for Cinco de Mayo, weddings, and other special occasions; the recipe usually contains ten or more ingredients, which can vary by region. However, it is reported that the use of this “Holy Trinity” of ancho, pasilla, and mulato chili peppers has been used in mole recipes since the Pre-Colombian era.

Mulato chili peppers are said to add a smoky flavor that has hints of black licorice to mole and other sauces. The dark chocolate to black colored fruits grow about 4 to 6 inches (10-15 cm.) long and are thicker or fatter than other chili peppers. The longer fruits are allowed to mature on the plant, the hotter the pepper will be. For mole sauce, mulato chili peppers are allowed to slightly over ripen on the plant. They are then roasted, de-seeded, peeled, and puréed.

How to Grow Mulato Pepper Plants

Mulato chili peppers are heirloom peppers that can be grown in containers or gardens just like any peppers. However, they are a rare find in garden centers, so most growers will need to order seeds.

Mulato chili pepper seeds take about 76 days to mature. Seeds can be started indoors eight to ten weeks before your regions expected last frost date. Plant seeds ¼ inch (6 mm.) deep in a well-draining, sandy-loam soil. Since young pepper plants can be tender, be sure to harden off seedlings before planting them outdoors.

Growing mulato peppers won’t require any additional care than any other pepper plants in the garden. Though peppers are relatively pest free, aphids can sometimes be a problem, as can fungal disorders in excessively humid areas. Mulato chili peppers will produce more fruit in locations or seasons where they experience warm, dry, sunny days and cool, dry nights.