Growing Soybeans: Information On Soybeans In The Garden 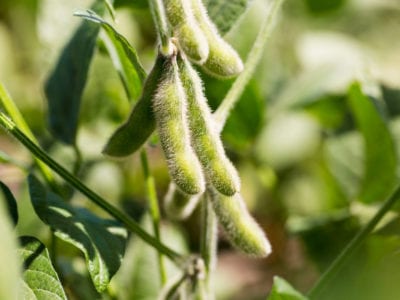 An ancient crop of the Orient, soybeans (Glycine max ‘Edamame’) are just beginning to become an established staple of the Western world. While it’s not the most commonly planted crop in home gardens, many people are taking to growing soybeans in fields and reaping in the health benefits these crops provide.

Soybean plants have been harvested for more than 5,000 years, but only in the last 250 years or so have Westerners become aware of their enormous nutritional benefits. Wild soybean plants can still be found in China and are beginning to find a place in gardens throughout Asia, Europe, and the Americas.

Soja max, the Latin nomenclature comes from the Chinese word ‘sou,’ which is derived from the word ‘soi‘ or soy. However, soybean plants are so revered in the Orient that there are over 50 names for this extremely important crop!

Soy bean plants have been written about as early as the old Chinese ‘Materia Medica’ circa 2900-2800 B.C. However, it doesn’t appear in any European records until A.D. 1712, after its discovery by a German explorer in Japan during the years 1691 and 1692. Soybean plant history in the United States is disputable, but certainly by 1804 the plant had been introduced in eastern areas of the U.S. and more fully after an 1854 Japanese expedition by a Commodore Perry. Still, the popularity of soybeans in the Americas was limited to its use as a field crop even as recently as the 1900’s.

How to Grow Soybeans

Soybean plants are fairly easy to grow– about as easy as bush beans and planted much the same way. Growing soybeans can occur when soil temperatures are 50 degrees F. (10 C.) or so, but more ideally at 77 degrees F. (25 C.). When growing soybeans, don’t rush planting as cold soil temperatures will keep the seed from germinating and stagger planting times for a continuous harvest.

Soybean plants at maturation are quite large, 2 feet (61 cm.) tall, so when planting soybeans, be aware that they are not a crop to attempt in a small garden space.

Soybean plants are harvested when the pods (edamame) are still an immature green, prior to any yellowing of the pod. Once the pod turns yellow, the quality and flavor of the soybean is compromised.

Pick by hand from the soybean plant, or pull the entire plant from the soil and then remove pods.

Printer Friendly Version
Read more about Soybeans (Edamame)
Next>
Did you find this helpful? Share it with your friends!
FacebookTweetPinEmail
Related Articles
Newest Articles
You might also like…
Additional Help & Information