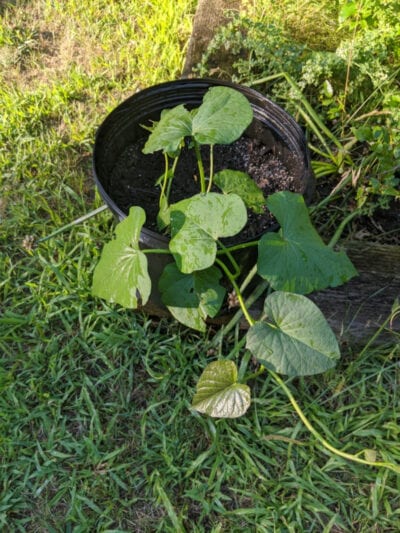 Sweet potatoes may seem like a relative of the common white potato, but they’re actually related to morning glories. Unlike other potatoes, sweet potatoes are grown from small seedlings, known as slips. You can order sweet potato plant starts from seed catalogs, but it’s very simple and much less expensive to sprout your own. Let’s learn more about starting sweet potato slips for the garden.

When to Start Sweet Potato Slips

Growing a sweet potato plant starts with producing slips from a sweet potato root. The timing is important if you want to grow large and tasty sweet potatoes. This plant loves warm weather and should be planted when the soil reaches 65 degrees F. (18 C.). The slips take about eight weeks to mature, so you should be starting sweet potato slips about six weeks before your last frost date in the spring.

How to Start a Sweet Potato Slip

Fill a box or large container with peat moss and add enough water to make the moss damp but not soggy. Lay a large sweet potato on top of the moss and cover it with 2 inches (5 cm.) of sand.

Sprinkle water on the sand until it’s thoroughly moist and cover the box with a sheet of glass, a plastic lid, or another cover to keep in the moisture.

Check your sweet potato after about four weeks to make sure the slips are growing. Keep checking them, pulling from the sand when the slips are about 6 inches (15 cm.) long.

Take the slips from the sweet potato root by twisting them while tugging on the slip. Once you have the slip in hand, place it in a glass or jar of water for about two weeks, until fine roots have developed on the slip.

Plant the rooted slips in the garden, burying them completely and spacing them 12 to 18 inches (31-46 cm.) apart. Keep the slips well-watered until you see green shoots appear, then water normally along with the rest of the garden.

Printer Friendly Version
Read more about Sweet Potatoes
<PreviousNext>
Did you find this helpful? Share it with your friends!
FacebookTweetPinEmail
Related Articles
Newest Articles
You might also like…
Additional Help & Information