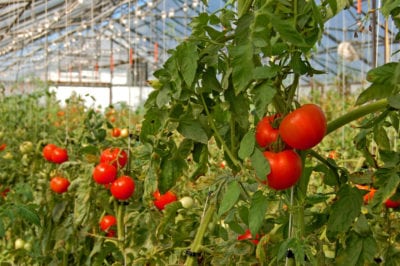 Growing tomatoes in a greenhouse is a great way to extend the season either due to a short growing season in your region or because you’d like to get a second crop. In some regions, the window of opportunity for cultivating tomatoes is short and folks are left pining for vine ripened tomatoes. This is where the beauty of greenhouse grown tomatoes comes into play.

Growing tomatoes in a greenhouse or high tunnel can extend the harvest season by several months up into late fall but that isn’t the only benefit. It also shields them from rain which can facilitate fungal disease.

Commercial greenhouse tomato growers go to great lengths and expense to manage their crop. Most use hydroponics, although some are grown traditionally in soil. Most are managed organically without the use of pesticides or synthetic fertilizers. Also, because the plants are grown indoors, they need some help with pollination. Some growers bring in bumblebees, while others vibrate the plants manually to move the pollen to its receptor.

Home growers can try to mimic these conditions too, but it does take a bit of an investment and some serious commitment, but hey, a longer tomato season makes it all worthwhile!

How to Grow Tomatoes in a Greenhouse

Air circulation is also important and is provided by exhaust fans as well as proper spacing of the plants. Circulation helps maintain a constant humidity level and reduces the incidence of disease.

To get the maximum number of tomatoes and really extend the growing season, plan on planting on a two-crop rotation. This means that a fall crop is seeded in early July or by early June and a spring crop is seeded in December to mid-January.

Transplants should be planted in moist soil so the stem is covered a half inch (1.3 cm.) or so above the previous soil line. Before the plants are a foot tall, have some sort of trellis system in place. Usually, this involves plastic twine tied from the plant to a heavy gauge wire support suspended above the row.

Train the tomatoes by removing all wide shoots as soon as they develop in the axils of the leaves, usually each week.

Commercial tomato growers may use electric vibrators, electric toothbrushes, and mist blowers, knocking the support wires or other automatic shakers to distribute pollen. Depending upon how many tomatoes you plan on growing, hand pollinating with a simple transfer of pollen with a very light brush or cotton swab will suffice. It may be somewhat time consuming, but without transfer of the pollen from the anthers to the stigma, there will be no fruit. Pollinate every other day.

As fruit is produced, thin to 4-5 fruit per plant when they are small. Remove lower leaves to facilitate air circulation and reduce the incidence of disease.

Be sure to give the plants plenty of water. Start either weekly sprays or biological controls the moment the plants are in the greenhouse to get a jump on potential problems.

And, lastly, keep meticulous records with complete dates, the name of the cultivars as well as any other special considerations.