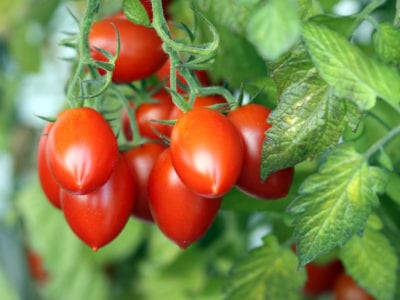 Tomato nomenclature can be confusing at times. In addition to heirloom vs. hybrid and determinate vs. indeterminate, tomatoes are also classified by type. Plum tomato varieties are one of the five types, with the other classifications being cherry, globe, beefsteak and oxheart. But exactly what is a plum tomato and how does it differ from these other types?

What is a Plum Tomato

The five tomato types are based primarily upon the size and shape of the tomato, as well as its culinary uses. Plum tomatoes tend to be oval in shape and are longer from stem to tip than they are wide. Some plum tomato varieties are more pear-shaped while others are cyclindrical.

Plum tomatoes can also vary in size. Mini plum or grape tomato varieties average 1-2 inches (2.5-5 cm.) long while the largest plum varieties mature at 5 inches (12.7 cm.) or more in length. But the primary feature which distinguishes plum tomatoes from other types of tomatoes is the amount of liquid pulp they contain.

Due to their narrow shape, plum tomatoes contain only two locules or seed chambers. The watery-liquid pulp surrounding the seeds is greatly reduced in plum tomatoes as compared to the other types. This makes plum tomatoes ideal for cooking, canning and sauces.

Bred for centuries as sauce tomatoes, plums have a deep, rich flavor which is enhanced when heated. Their flesh stays firm even when fully ripe and plum tomatoes tend to be less seedy than other types. In addition to sauces, other plum tomato uses include applications where a meaty tomato is desirable.

How to Grow Plum Tomatoes

If you’re curious about how to grow plum tomatoes, rest assured. Growing plum tomatoes is no different than cultivating other types of tomatoes. In many climates, it’s best to start tomatoes indoors 6 to 8 weeks before the last frost, or purchase seedlings from your local nursery.

When growing plum tomatoes indoors, a southern-facing window or supplemental lighting is usually required to prevent the seedlings from becoming leggy. Use a quality potting mix which drains well. Keep the soil moist, but not soggy. Fertilize as needed.

Prior to moving plum tomato seedlings into the garden, it’s necessary to acclimate them to outdoor conditions of sun and wind. Once the seedlings are hardened off and all danger of frost has passed, they can be transplanted in a sunny location.

Plum tomatoes can be planted deeper than initially grown in the pot, as long as the upper leaves and stem remain above the soil level. Tomatoes often fare better in dry weather if their rootballs are placed 6 to 8 inches (15-20 cm.) underground.

Size and shape are not the only visual differences between varieties of plum tomatoes. Modern cultivars can mature to a multitude of tomato colors including yellow, orange, purple and red-striped. Here are a few common and unusual plum tomato varieties you might find in your favorite seed catalogs: