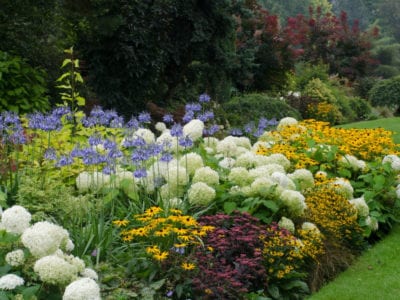 If you’re like most gardeners, you think of raised beds as structures enclosed and raised above the ground by some sort of frame. Raised beds with no walls also exist. In fact, they’re the most common way to build raised beds on a large scale, and they’re popular on small vegetable farms. These mounded raised beds are also great for home gardens.

Unframed raised beds offer most of the same advantages as framed raised beds. These include improved drainage, a deeper volume of loosened soil for plant roots to explore, and a raised growing surface that is easier to reach without kneeling. Raised bed soil also warms up earlier in spring.

An additional advantage of unframed raised beds is that you can install them with significantly less expense and effort, which is especially important if you’re gardening on a large scale. You will also avoid the potential toxicity associated with some framing materials.

Raised beds with no walls don’t last as long as those with walls, however. If left untended, they will eventually erode and sink back to the level of the surrounding soil. That being said, you can simply build them back up every year or two, and this presents an opportunity to work additional organic material into the soil.

Mounded raised beds also take up more space than framed raised beds that provide an equivalent growing space. That’s because you need to account for the inclines at the margins of the bed. However, the lack of walls may allow squash and other vining plants to sprawl over the sides without being damaged, and small plants like mixed greens may be able to grow on the inclines. This can actually expand your growing area on the equivalent volume of soil.

Since there are no walls separating the walkways from the bed, weeds can spread more easily into an unframed bed. A layer of mulch on the walkway will help prevent this.

How to Make an Unframed Raised Bed

To build an unframed raised bed, mark out the area you will use for the bed. Common dimensions for an 8 inch deep (20 cm.) unframed raised bed is 48 inches (1 m.) between walkways with 36 inches (91 cm.) of flat growing space across the top. 12 inches (31 cm.) horizontally are left for the inclines.

When the soil is dry and warm enough to work, use a rototiller or a spade to loosen the soil. Simply by tilling or digging, you will reduce compaction and break up clumps, typically causing the soil surface to elevate by several inches (8 cm.).

Next, add at least 2 to 3 inches (5-8 cm.) of organic material, such as compost, to the entire area designated for the raised bed. Mix the organic material into the loosened soil using a rototiller or a spade.

As an alternative to adding material on top of the bed, you can dig down into the walkway between your raised beds. Add the soil to the beds so that you both raise the beds and lower the walkway.

After building your mounded raised beds, plant them as soon as possible to prevent erosion.