Is Ugly Fruit Edible: What To Do With Ugly Produce 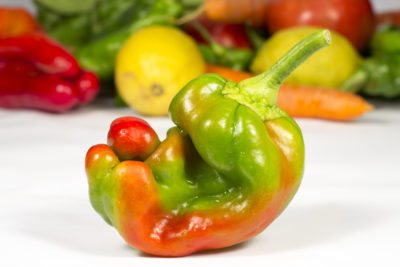 I’m sure you’ve heard the saying “beauty is only skin deep” in one form or another. Well, the same can be said for produce. We’ve been sold a bill of goods regarding our produce. Supermarkets sell only Number 1 grade produce, produce that is perfect in the eyes of the store’s buyer and that we have been brainwashed into believing makes it so. What about naturally imperfect produce, otherwise known as “ugly” produce?

What is Ugly Produce?

Consumers expect to find unblemished fruit, arrow straight carrots and perfectly round, red tomatoes, but if you’ve ever grown your own produce, you know this idea is laughable. In fact, the whole idea of what produce is deemed ugly is laughable, literally. Many of these so-called “ugly” fruit and veggies are hilarious looking.

Every gardener knows that there is no such thing as perfection in the garden, and I’d venture to say that all of us have grown naturally imperfect produce. The thing is we probably ate it anyway knowing that most ugly produce is perfectly edible. So no worries as to what to do with ugly produce in the garden. Eat it up! Use it in smoothies, puree it, or make it into sauces. The only exceptions would be if the produce is rotting, showing signs of mold, or insect damage.

What about the rejected produce from the supermarkets, the grade Number 2 produce? What do they do with the ugly produce? Unfortunately, much of the produce that has been declined by the grocer will end up in a landfill. The USDA (2014) estimated that almost 1/3 of edible and available food in the United States was wasted by retailers and consumers. This amount comes to a staggering 133 billion pounds (60 k.), and, it often goes right into the landfill – yep, the landfill!

All that may change, though, since a continuing concern for our environment has engendered the ugly produce movement.

What is the Ugly Produce Movement?

France, Canada, and Portugal are all countries leading the ugly produce movement. In those countries, some grocers have made a campaign of selling ugly produce at a discounted rate. France has gone even farther by passing legislation barring supermarkets from intentionally spoiling and throwing away food. They are now required to donate unsold foods to charity or as animal feed.

The ugly produce movement didn’t start with action taken by entire countries. No, it was begun by a small number of eco-conscious consumers that began buying imperfect produce. Asking the local grocer to sell them the less-than-perfect fruit and veggies gave some stores an idea. At my local supermarket, for instance, there is a section of produce that is not perfect but is definitely for sale, and at a reduced price.

While the ugly produce movement is building momentum, it’s still rather slow going for most of the United States. We need to take a page from European shoppers. Great Britain, for example, has conducted a “Love Food, Hate Waste” campaign since 2007 and the EU, in general, has pledged to cut its food waste by half within the next decade.

We can do better. While the local supermarket may not be interested in selling second grade produce due to liability, a local farmer might. Start your own movement by asking at the local farmers market. They may be only too happy to sell you their less-than-perfect produce.