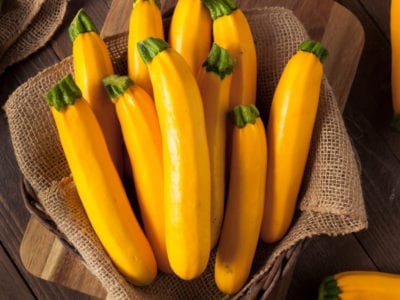 Zucchini has been a garden staple for centuries and has been cultivated since at least 5,500 B.C. If you’re a bit tired of the typical green zucchini, try growing golden zucchini plants. A twist on an old favorite with brilliant yellow color, the following article contains golden zucchini information, including how to grow golden zucchini and all about golden zucchini care.

Zucchini is a rapidly growing, prolific producer. Golden zucchini plants are much the same. There is some confusion about yellow squash vs. golden zucchini. The two are not the same and yet are similar, being classified as summer squash. The major difference between the two is that golden zucchini has the classic elongated zucchini shape and yellow squash has a fat bottom and tapers towards the neck or even curves like a swan at the neck.

Golden zucchini is an heirloom, open-pollinated, bush-type of zucchini. The foliage is said to be quite large, and coloration varies from medium green to yellow. The bushing quality of this squash means it needs plenty of space in the garden.

The fruit of golden zucchini is medium in length and long and slender with brilliant, yellow color. The flavor is much the same as green zucchini, although some folks say it is sweeter. As with green zucchini, golden zucchini has a more delicate flavor and texture when picked small. As the fruit grows, the rind becomes tougher, and the seeds harden.

How to Grow a Golden Zucchini

Depending upon the variety, golden zucchini will be ready to harvest in 35 to 55 days from planting. As with other zucchini varieties, plant golden zucchini in full sun in well-draining, nutrient-rich soil. Prior to planting, work a few inches (8 cm.) of compost or other organic matter into the soil. If your soil does not drain well, consider growing golden zucchini in raised beds.

Zucchini likes to start off in the area it will grow, but if you can’t wait for soil temperatures to warm to direct sow into the garden, start seeds indoors three to four weeks prior to the last frost. Be sure to harden off the seedlings for a week before transplanting them.

If you are starting outside, be sure that soil temperatures have warmed, and the air is close to 70 degrees F. (21 C.). Resist the urge to plant too many zucchini seeds; one plant will produce 6 to 10 pounds (3-4.5 kg.) of fruit over the growing season.

Space plants about 3 feet (just under a meter) apart to allow for space to grow, discourage disease, and allow for airflow. Usually, zucchini is started on a hill with three seeds per hill. As the seedlings grow and get their first leaf, snip off the two weakest, leaving one strong seedling per hill.

Keep the soil consistently moist during the growing season. When the plants are very young, mulch around them to retain moisture and control weeds; as the plants grow, the large leaves will shade the soil and act as living mulch.

Monitor the plants for pests. If early pests become a problem, cover the plants beneath a floating row cover. Drought-stressed plants are more susceptible to insect injury as well as some diseases.

Zucchinis are heavy feeders. If the leaves become pale or seem weak, side-dress the plants with well-aged compost or use a foliar spray of kelp or liquid fish fertilizer.

Harvest the fruit at any time, but smaller fruit tend to be most succulent and delicate. Cut the fruit from the plant. Ideally, you should use the squash within three to five days or store them in the refrigerator for up to two weeks.

Printer Friendly Version
Read more about Zucchini
<PreviousNext>
Did you find this helpful? Share it with your friends!
FacebookTweetPinEmail
Related Articles
Newest Articles
You might also like…
Additional Help & Information