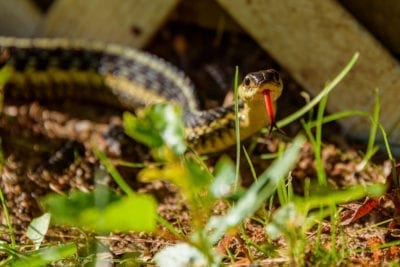 Along with pests and animals that cause damage, we may sometimes have to deal with snakes in the garden. Take a few minutes to think ahead in case you happen to see some type of snake in or around your planting area. This is likely, as snakes like cool, freshly turned soil and moisture.

Information about garden snakes says this type is especially likely to be in your yard, or near your pond or stream. Often, several huddle together, under leaves or broken branches. Sometimes, you may see them sunning on rocks. Garden snakes are said to be the most primitive type. Keep reading to learn more about garden snakes.

It is important to be familiar with the appearance of a garden snake so that it doesn’t frighten you. What does a garden snake look like? These small snakes are generally no more than two to three feet (0.5-1 m.) long with lengthwise markings in yellow, red, or white.

There are a number of types of garden snakes, differing by location. These are non-venomous snakes, so there is no need to destroy them. Unlike some other snakes, babies of garden snakes are born alive, not in eggs to hatch.

Garden snakes, nicknamed garter snakes, come in many varieties, various colors, and have different markings, depending on your area of the country. These snakes are usually brown or black but may be a greenish color. Most have a checkerboard pattern near the stripes. Other colors of these snakes vary.

Here are a few examples:

Coexist with garden snakes if you can. They’re not harmful to humans. In fact, they can even be helpful in the garden. Be prepared to recognize them in your garden, though, so you don’t mistake them for a venomous type. Contact your local extension office for help with specific snakes native to your region.

If you can’t tolerate the idea of snakes in the garden, habitat modification is the most effective way to keep them out.