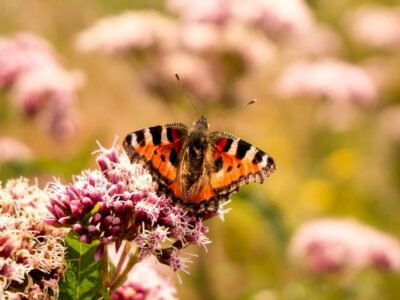 Effects of Climate Change on Pollinators

Climate change is a change in global (or regional) climate patterns in direct relation to increased levels of carbon dioxide produced by the use of fossil fuels. What is the effect on bees? Climate change affects pollinators in several ways, but the gist is that the extremes in weather create stressful conditions that affect feeding, habitat, and procreation.

Most species have the ability to adapt to changing conditions within reason, and bees and butterflies are no exception. However, when conditions swing wildly from the norm, pollinators may be unable to adapt and instead either migrate to areas with more optimal conditions or die out.

Even when a species has adapted or migrated to a more favorable area, climate changes such as extreme rain or heat affect nectar and pollen production of plants that are often both food source and habitat.

Take the monarch butterfly for example. Monarchs are major pollinators as well as being food to many species of wildlife, but in a period of twenty years the population has dropped a whopping 80 percent.

As if this wasn’t bad enough, Monarchs are sensitive to temperature and rely on it to signal their migration. If they migrate too early, the milkweed is not yet mature to support the lifecycle of this pollinator.

Lastly, extreme weather may affect the Monarch’s milkweed habitat, leaving this pollinator with no food, home, or place to lay eggs. Although climate change is a vicious cycle, you can help by reducing or eliminating the use of pesticides and herbicides, planting a pollinator garden, and reducing your footprint by eliminating or reducing the use of plastics, composting, and recycling your waste.