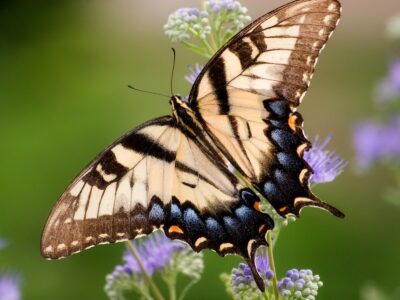 Swallowtail butterflies are popular species for their attractive wing forms and varied colors. Choose host plants for swallowtails’ caterpillars, as well as nectar for adults, to see more of these spectacular insects in your garden.

Swallowtails belong to the Papilionidae family of butterflies. Several species are native to and common in the U.S. The swallowtails are among the most spectacular of butterflies with their characteristic “tails” reminiscent of swallows.

Since they are so attractive, many people want to bring more swallowtails to their gardens. To get more in your backyard, choose appropriate host plants for swallowtail butterflies. These are the plants on which particular species lay their eggs. The caterpillars feed on the plants until they pupate.

You can find black swallowtails throughout most of the U.S. The exception to this is the Pacific northwest. They also live in northern Mexico and southern Canada.

The largest species in the U.S., the giant swallowtail can be 6 inches (15 cm.) across. One of the most interesting features is the difference in coloring between the top and underside of the wings. On top, they are black with light yellow spotted stripes. Underneath, the wings are bright yellow, a camouflaging strategy.