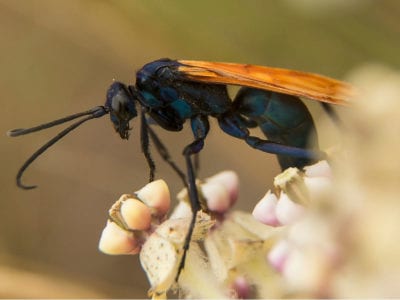 You may see a large, dark wasp feeding on flowers in your garden and wonder what this scary looking insect is. Spider wasps are not uncommon in the garden where they eat nectar and prey on spiders for egg laying. With a few spider wasp facts, you can get a better understanding of these insects and whether or not you need to control them in your garden or yard.

What are Spider Wasps?

Spider wasps in gardens can be an intimidating sight. These wasps are actually hornets related to yellow jackets. They are large and mostly black. They have long legs and dark wings that may look oily. You’re most likely to see them on and around your flowers, as they feed on nectar.

What gives spider wasps their name is the fact that the females of the species prey on spiders. When she catches one, she stings and paralyzes the spider. She then drags it to her nest where she’ll lay eggs. The spider provides a food source for when they hatch. So, while you may see these wasps on your flowers, you may also see one dragging a spider across the ground.

One particularly scary type of spider wasp is known as the tarantula hawk. Growing to 2 inches (5 cm.) in length, this large insect hunts down and paralyzes only the biggest of spiders, the tarantula. They are found mostly in the deserts of the southwestern U.S., but really anywhere there are tarantulas.

Spider wasps can sting people and it’s a pretty bad sting in terms of pain. However, if you’re not a spider, this insect is unlikely to bother you. They may look big and scary, but unless you really irritate them, these hornets will not sting.

So, is spider wasp control necessary? They are not garden pests in the classic sense, as they will leave your plants alone. However, they do kill spiders which are considered beneficial insects. Spider wasps live solitary lives, so you don’t have to worry about big colonies swarming your garden.

Whether or not you want to control them in your garden is up to you. Keep in mind that using pesticides to control wasps like these will likely harm other insects too. Spider wasps and other insects you may harm are pollinators that provide a useful service in the garden, no matter how scary they look.