White Squirrels In Your Yard: Leucism And Albinism In Squirrels 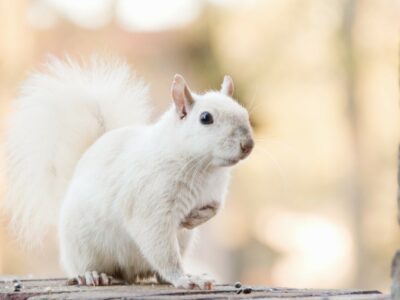 If you’ve ever noticed both gray and white squirrels in your neighborhood or a local park, you have witnessed an interesting natural phenomenon. The light coloring makes these squirrels more vulnerable to predators, which is why they are rare. Consider yourself lucky if you see one.

The explanation for most cases of white fur is leucism in squirrels. Leucism is a genetic trait in which a recessive allele results in a reduction of pigment. You can see leucism in many types of wild animals, including squirrels.

You can identify a leucistic squirrel by its white fur, of course, but it won’t necessarily be pure white all over. Leucism causes varying reductions in pigment. You may see one squirrel that is a dirty white all over and another that has patches of brown and white.

Is There Such a Thing as an Albino Squirrel?

Many people mistakenly assume a leucistic squirrel is an albino. Albinism is a different genetic mutation. While leucism causes a reduction in all pigment types, albinism completely lack one pigment, called melanin.

This results in a snowy, pure white animal with reddish eyes. The eyes are the best way to determine if you have a leucistic or albino squirrel. The eyes of leucistic squirrels look like those with normal coloring.

Albino animals are particularly rare in the wild because they really stand out to predators. If you would like to find albino squirrels in the wild, travel to Olney, Illinois. The city has a protected population that numbers in the hundreds most years.

More than 100 years ago, a resident found two albino squirrel pups and gave them to his sons to raise. Eventually, Illinois banned confining wildlife, so they released the squirrels. The town now takes pride in the local population of albino eastern gray squirrels and even has a yearly count. To protect them, the town bans free-roaming dogs and cats.

If you’re lucky, you’ll see some leucistic squirrels and other animals in your garden. Be on the lookout on walks and in local parks. You may just spot one.