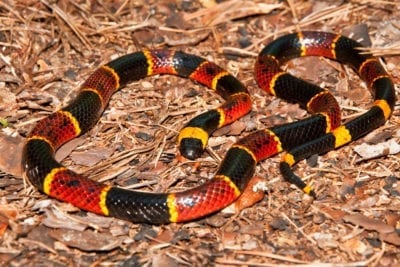 Most people harbor an unnatural fear of snakes, partly because they can’t immediately tell a venomous from a nonvenomous snake. But the threat of a snakebite is low; most snakes only bite when provoked and prefer to retreat if the option is available. Statistics show fatalities from snakebites are fewer than those from bee or wasp stings or lightning strikes. Read on to learn about some of the more commonly seen southern snake varieties in and around the home landscape.

Learning to identify snakes in your area can prevent undue fear and unnecessary eradication of environmentally beneficial snakes. Even a pit viper is harmless when observed from a distance and left alone.

Learn how to recognize snakes in South Central states by consulting field guides available online, in bookstores, and in libraries. Your local extension office can also be a good resource for snakes in this area.

Venomous snakes, particularly pit vipers, share identifiable characteristics – a triangular-shaped head, an elliptical pupil like a cat’s eye, a depression or “pit” between the eye and nostril, and a single row of scales below the vent under the tail. A rattlesnake warns of its presence by shaking the rattle on the end of its tail.

The coral snake is the only venomous snake mentioned above that is not in the pit viper family and lacks those characteristics. Its coloration is its calling card, and to avoid confusing it with similar snakes that are nonvenomous, such as the milk snake, recall the rhyme: “If red touches yellow, it will harm a fellow. If red touches black, it’s a friend of Jack.”

Nonvenomous snakes typically have elongated heads, round pupils, and lack the facial pit. They have two rows of scales beneath the vent under the tail.

Snakes hide in the grass, under rocks and debris, and lay in wait for prey, so they are easily camouflaged. When outdoors, take precautions to avoid snakes by walking on clear paths where you can see the ground. Only step over logs or rocks if the ground on the other side is visible. When walking in known snake habitats, wear snake-proof leather boots or snake leggings.

If you wish to avoid snakes in the garden, try to keep the area free of possible food sources and hiding places.

If bitten by a venomous snake, seek medical attention immediately. Remain calm. Excitability can increase blood circulation and speed the flow of venom throughout the body. Do not apply a tourniquet, ice packs, or make cuts around the bite. If possible, wash with soap and water. In case of swelling, remove jewelry and restrictive clothing near the wound.

For a nonvenomous snake bite, treat the wound like you would a cut or scratch. Keep it clean and apply antibiotic ointment.