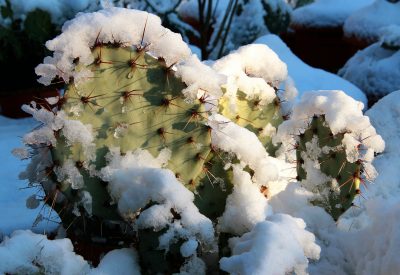 We tend to think of cacti as strictly desert plants but there are also cacti that are native to rain-forest regions. Zone 7 is actually a perfect climate and temperature range for many types of cacti. The biggest problem for zone 7 cactus is usually soil type. Soil must be well draining and, in most species, slightly gritty. There are many cactus plants for zone 7 that will grow successfully and give your landscape desert-like panache.

Desert cacti experience tremendous ranges of temperature. During the day temperatures soar over 100 degrees F. (38 C.) but at night the cold can approach freezing. This makes hardy cactus plants one of the most adaptive types in the plant kingdom. Many plants in the group are not only suitable for zone 7 but will thrive in those regions.

Hardy cactus plants are found in the mountains of northern Mexico into the western United States. These plants are adapted to the high, cool temperatures of mountainous regions. They are particularly well suited to exposed sites where cold winds and dry soils are prevalent. These plants can even tolerate temperatures of 0 degrees F. (-18 C.). There are even cacti that can survive in zone 4 or below.

Growing cactus in zone 7 outside year-round is, therefore, not only possible but there are plenty of choices regarding plants. One thing to note regarding cold hardy cacti is the type of medium in which they grow. They are often squeezed in between rocks, in crevasses or on soil that is liberally peppered with small rocks and pebbles. This keeps the plant’s roots from sitting in boggy soil even where rain is prevalent.

When growing cactus in zone 7, choose your site well and ensure the soil is well draining. Most cactus require some grit in the soil, so add some coarse sand or other gritty material to a depth of at least 8 inches (20 cm.) before installing the plant. The ideal mix is ½ grit to soil.

Full sun is preferred for most cacti, but some can tolerate partial sun locations. Take care not to plant in a depression where moisture can collect. Many cacti do very well in containers too. Since the root zones can be exposed in cold, windy conditions, wrap the container in winter and use a protective mulch over the top of the soil.

Types of Cactus Plants for Zone 7

Some of the hardiest cactus plants are in the genus Echinocereus. Another cold tolerant genus is Opuntia, Escorbaria, and Pediocactus. Each is suitable as a zone 7 cactus species.